Why Elon Musk Wants to Drop Nuclear Bombs on Mars? 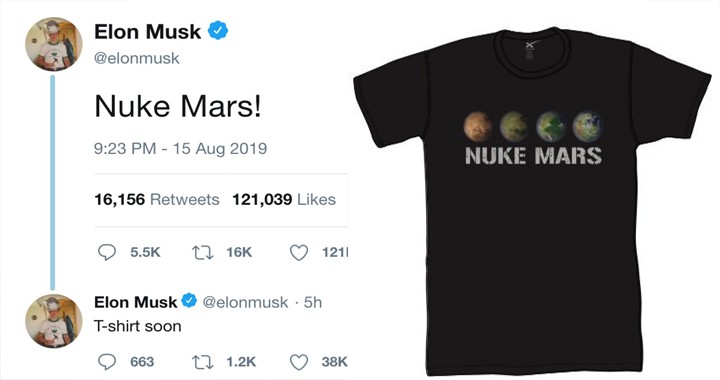 In 2015 Elon musks went on an interview with a billionaire on Stephen Colbert’s late-night talk show to discuss his idea to bomb Mars. In that interview, both Colbert and musk discuss habitation on mars.

As we all know, the atmosphere of Mars is very freezingly cold, which doesn’t allow human survival on that planet. Musk suggested an idea of using thermonuclear bombs and did bombardment on poles so that the red world becomes warm and polar ice caps melt and from which CO2 is released which will cause greenhouse effect and mars become a suitable place for human survival, and more and more people will think about to settle on Mars.

But his theory is rejected by many scientists as they said this would damage mars’ internal environment, which will cause greater damage in the future, and maybe it will become a threat to our whole earth.

In 2017 musk said that he has a dream of permanent human settlement on mars could be the single most expensive construction undertaken to cost $10 trillion which is one-eighth of the total cost of the global economy according to a tweet from Musk.

This time Elon musk is suggesting another idea with his tweet on Friday that there is enough CO2 on mars inside the soil after the recent NASA study that there is not so much CO2 on mars to think about the initiation of the greenhouse effect. He also tweeted “nuke mars” with his 28 billion followers, and then he tweeted “t=shirt soon.”

Elon Musk wants to launch two huge fusion bombs into the sky above Mars, which will explode every few seconds, so that the planet can be warm enough to allow humans to live there.

“What I was talking about,” Musk said, “was having a series of very large, by our standards, but very small by calamity standards, essentially having two tiny pulsing suns over the poles. They’re really above the planet. Not on the planet.”

Asked whether the plan would be difficult to make happen, Musk said: “Yeah, absolutely, no problem”. The entrepreneur was speaking at an event for Solar City, his energy company.

Mars is currently inhospitable to humans because the environment is too thin and too cold for us to live there. One way of fixing that would be to put greenhouse gases into the planet’s atmosphere, triggering an intentional climate change that would make it habitable.

But Musk wants to do that using the two little stars, instead. The suns would warm the planet and make the frozen carbon dioxide warm into gas — that would help create an atmosphere more like Earth’s, so that humans could live there long term.

If Musk is serious about nuking the Red Planet — and it’s possible that he’s not — he’ll have to overcome significant skepticism. For starters, many scientists and exploration advocates have concerns about any terraforming effort:

Do we have the right to fundamentally transform another world — especially one that might host its own uniquely adapted life even today — for our own purposes?