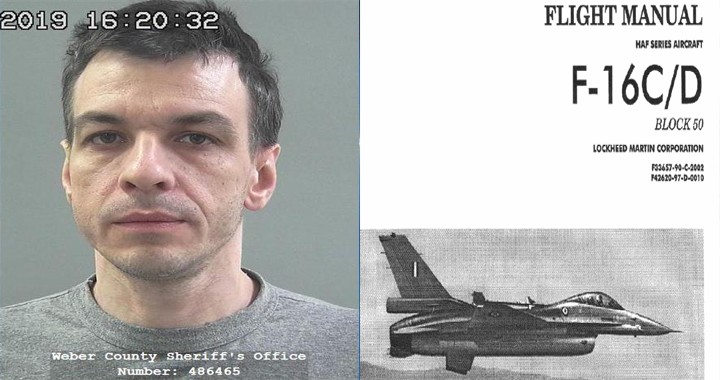 A Russian national is currently being held in Weber County, Utah court for conspiring against the United States by buying F-16 manuals on eBay.
Man is being arrested and charged with smuggling and violating the Arms Export Control Act”.
The man insists he needed these and other files, like those for F-35s, to develop an ultra-realistic fighter jet simulator.

It’s alleged that Tishchenko got hold of manuals for the F-16, F-35, F-22 and A-10, which he proceeded to list on eBay and sell again, to purchasers in “Cyprus, Japan, the Netherlands, Australia, Germany and Taiwan.”

The Russian, identified as Oleg Tishchenko in court documents including the previously filed affidavit for extradition, is said to have taken to eBay in 2011 in a quest to buy actual flight manuals for the F-16A/B.

The documents could not be shipped directly to Russia because the seller did not allow for sending items abroad, so the man asked members of the Digital Combat Simulator (DCS) game forum for help. A forum member in Texas eventually agreed to send the docs to Moscow, which he did later that year.

While the sender said he didn’t see any materials marked as classified and was assured the texts were obsolete, the mailing still broke the arms exports laws as combat systems manuals are included in the US munitions list and require export licenses for shipment overseas.

Tishchenko was charged back in 2016 but was eventually arrested only this year when he travelled to Georgia, a post-Soviet country that extradited him to the US.

The Russian embassy in Washington suggested that Tishchenko might’ve been deliberately framed by the US authorities.

“There are signs of provocation by the American special services,” the embassy said, vowing to provide any necessary consular assistance to protect the man’s legal rights.

Tishchenko, who is now held at a Weber County jail in Utah, says he works for Eagle Dynamics, a Russia-based software developer that has been creating leading flight simulators for over a decade.

The manuals were crucial to understanding “how stuff works” in US jets which the company incorporated into their latest product, the DCS.

The game is considered one of the most advanced flight simulators available, not least because the aircraft models are exceptionally accurate to their real-life counterparts.

While it’s not immediately clear how the readily-eBayed manuals for the Cold War-era tech would be harmful for the US, the Department of Homeland Security jumped on the case, with an undercover agent contacting Tishchenko in a sting operation.

The investigation learned that he’s collected flight manuals for a number of jets, and also auctioned F-16A docs to buyers in Cyprus, Japan, the Netherlands, Australia, Germany and Taiwan between 2012 and 2015. He also needed a whole list of other warplane manuals.

Curiously, it is claimed that Tishchenko “also informed [the agent] that he would like to acquire F-35 and F-22 flight manuals” while promising that they “would not be provided to any third persons, and I think even not shown to anyone in our company.”

It is not known if the man managed to get his hands on the manuals for the highly-complex and controversial F-35 jet, which continues to be mired by hundreds of issues while at the same time being sold to US allies. Lockheed Martin has recently slashed the price of the F-35A, days after the jet marked its “first combat employment.”