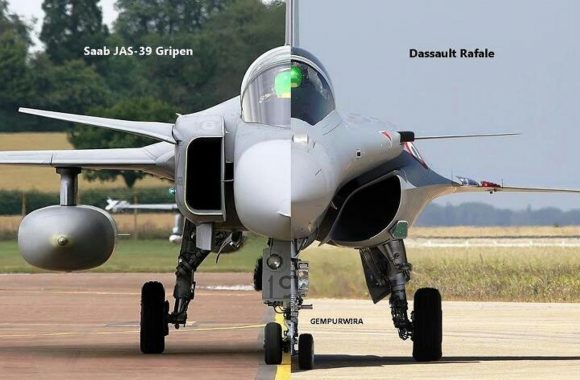 In an interview to ThePrint, SAAB India’s chairman and managing director (CMD) Ola Rignell Offered India Gripen Fighter Jet At “Half” The Cost Of Rafale.

Indian Air force  is looking to acquire 114 new medium multi-role combat aircraft (MMRCA) to shore up its depleting strength, Swedish defence major SAAB has pitched for a complete Transfer of Technology (TOT) and local production of its Saab JAS 39 Gripen fighter jet at “half” the cost of French alternative Dassault Rafale.

SAAB India’s chairman and managing director (CMD) Ola Rignell made the cost claims in an interview to ThePrint, but added that he wouldn’t be surprised if India went in for additional 36 Rafale fighters in the coming years, circumventing the ongoing process to acquire new jets in larger numbers.

“India bought 36 Rafale fighter jets from France off the shelf. SAAB and Brazil also signed a contract in 2015 for the sale and local manufacturing of 36 Gripen. The cost was half of what the value of the Indian deal was,” said Rignell, referring to Brazil’s $4.68 billion deal with SAAB to manufacture the Gripen locally.

“We are setting up an entire aviation ecosystem in Brazil. And the experience and knowledge that Brazil is gaining from this manufacturing is being used by them to design their indigenous fighter aircraft,” the SAAB India CMD said.

In 2012, EADS’s Eurofighter and Dassault Aviation’s Rafale had emerged as the winner of the 2007 MMRCA bid, with the latter being the lowest bidder. But the contract negotiations got stuck over prices. Three years later, the Modi government cancelled the protracted talks and decided to buy 36 Rafale fighters in fly-away condition in a €7.87 billion deal.

Now, France is offering another 36 Rafale fighter jets in a government-to-government deal. But these numbers will not suffice in view of the Indian Air Force (IAF)’s MMRCA requirements.

During the interview last week, Rignell spoke about what the company is offering to India, his expectations, and the issue surrounding its sales to Pakistan.

Speaking to ThePrint, Ola Rignell highlighted the efficiency of SAAB’s single-engine multirole fighter aircraft vis-à-vis the Rafale, which is being called a game changer for the IAF in the region due to its weapons package.

Gripen has the same weapons package as Rafale including the Meteor air-to-air missile, said Rignell.

“All NATO (North Atlantic Treaty Organisation) missiles are integrated with the Gripen. The only one which is missing is SCALP because it is a French missile. But if India wants, we can integrate the SCALP also though Gripen already has a substitute,” said Rignell.

He pointed out that European missile manufacturer MBDA, which makes both Meteor and SCALP, actually found Gripen as the most mature jet to test their missiles on.

“MBDA ‘test beded’ the Meteor on a Gripen. They found the Gripen to be the most mature. Eighty per cent of Meteor firing tests took place from a Gripen,” he said.

Rignell added that Gripen will always be cheaper in comparison to Rafale in life cycle costs as well because of its single-engine build.