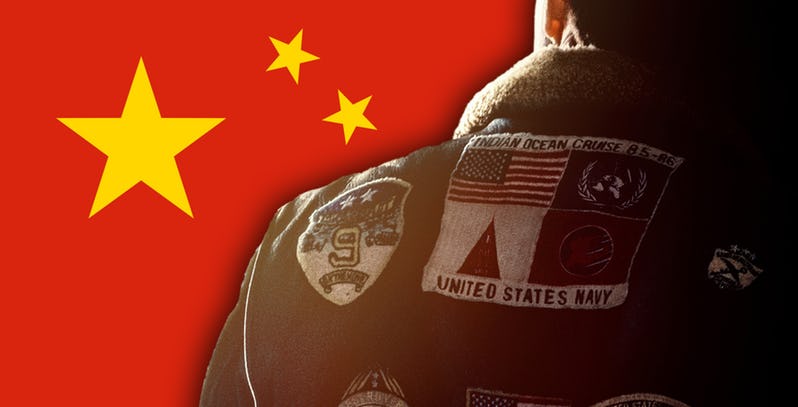 In the trailer for “Top Gun: Maverick,” Tom Cruise’s character can be seen wearing his signature leather jacket, but something isn’t the same anymore.

An eagle-eyed Twitter user pointed out that Maverick, whose entire character and name suggest a fierce independence, now wears a jacket that appears changed to appease China, the US’s current chief military adversary.

Maverick’s old jacket had a large patch that read “Far East Cruise 63-4, USS Galveston,” commemorating a real-life US battleship’s tour of Japan, Taiwan, and the Western Pacific. Fittingly, the patch displayed the US, UN, Japanese, and Taiwanese flags.

In the new movie, the patch now has the US and UN flags, but not the Japanese or Taiwanese flags, and makes no mention of the Galveston.

There’s a new Top Gun movie coming out. And Maverick is wearing the same leather jacket – only this time it’s Communist Party of China-approved, so the Japanese and Taiwanese flag patches are gone (screenshot on right is from the new trailer)… pic.twitter.com/gUxFNFNUKX

China frequently boycotts and retaliates against any organization that recognizes Taiwan or refers to it as a country. China threatened multiple airlines not to refer to Taiwan as a country, and they all buckled under the pressure. The US responded, calling it “Orwellian nonsense.”

While the US has left the question of Taiwan’s independence open-ended, a recent defense paper referred to Taiwan as a country, prompting an angry response from Beijing.

The new film, a big-budget major-studio effort on a hot property, may have sought to maximize revenues by making the movie palatable to Chinese censors and audiences.

Maverick will follow its titular character, Pete “Maverick” Mitchell (Cruise), who is still a captain in the Navy after more than 30 years of service. Maverick may still be at the same rank (and prefer it that way) but the world around him has drastically changed.

Relations between the United States and other countries have drastically shifted since the end of the Cold War, so how it will be interesting to see how the film recognizes the shift in geopolitical relations.