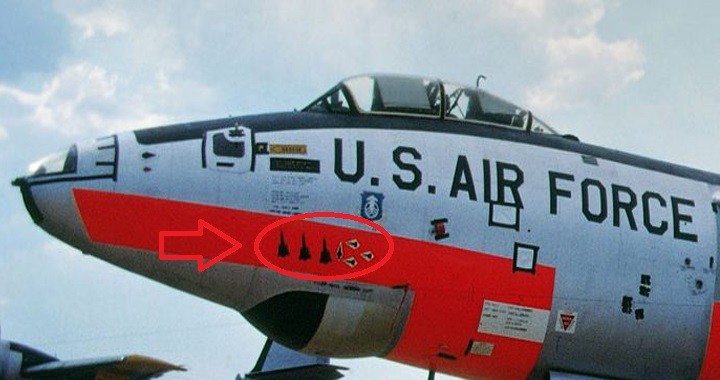 In March 1960, even before delivery of the first A-12 prototype, Lockheed and the U.S. Air Force (USAF) discussed the development of an interceptor version of the A-12. Lockheed started development of the Lockheed YF-12 interceptor, as a lower-cost replacement for the F-108

The Hughes AIM-47 Falcon, originally GAR-9, was a very long-range high-performance air-to-air missile that shared the basic design of the earlier AIM-4 Falcon.

Related Article: How F-14 & F-15 fighter jets were able to achieve a simulated KILLS against the SR-71 Blackbird

The interesting photo in this post features JQB-47E 53-4256 which had been with the 3214th Operational Maintenance Squadron (OMS) at Eglin Air Force Base (AFB) before being placed in storage at Davis Monthan AFB on Aug. 20, 1968. 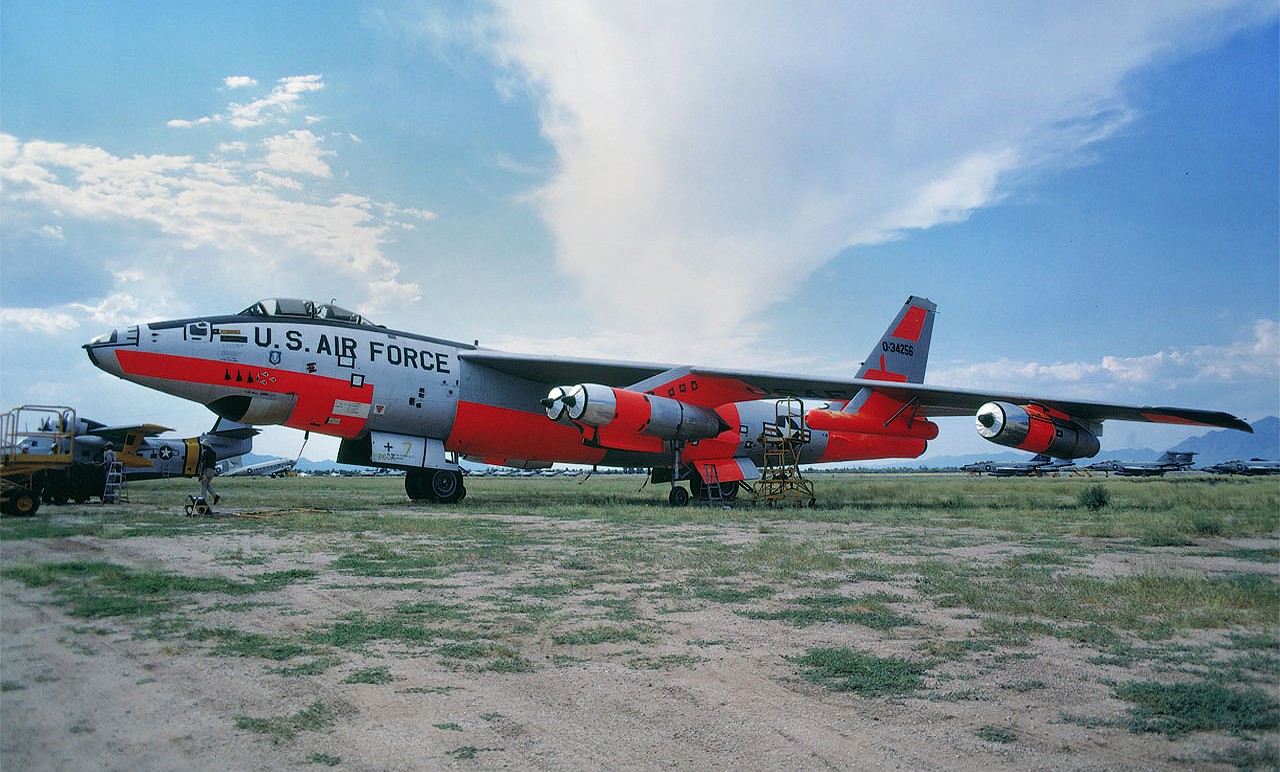 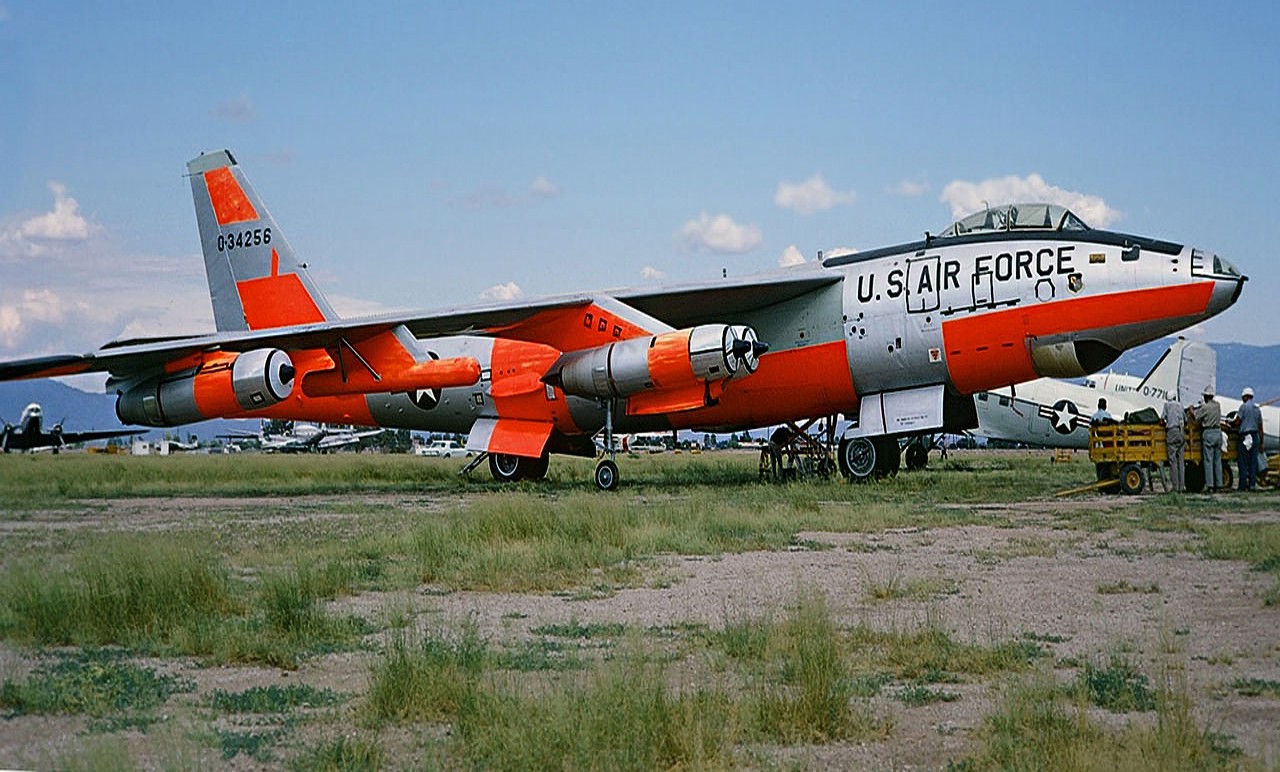 According to Monthan Memories “there were 7 test shots from YF-12A interceptors; one shot downed a sister QB-47E drone over the Pt. Mugu/Pacific Missile test range.

The B-47 has a photo nose, and was one of only a few RB-47s built stock for the photo mission… a source also said that there was arresting gear behind the fuselage wheels for drone recovery. The odd under-wing apparatus is part of a target measuring device to tell how close a missile passed by the drone.”

QB-47E was the designation given to two B-47Es that were converted into prototype radio-controlled drones for use as targets or for other tasks deemed too hazardous to human occupants. Twelve more conversions were carried out by June of 1960.

The QB-47Es were equipped with control equipment, movie cameras, and other data collection equipment. They also carried ECM gear and chaff dispensers in order to make for a more realistic target during the tests. Just in case-control of the drone was ever lost, explosives were carried so that the aircraft could be intentionally destroyed before it could wander into a populated area.

They were operated by the 3205th Drone Director Group at Eglin AFB between 1959 and 1960. Even though the QB-47Es were unmanned, they were generally considered as being too expensive to be treated as being expendable, and the guided missiles tested against them were usually programmed to make near-misses. Even in spite of such precautions, a QB-47E was inadvertently destroyed by a direct hit from a Bomarc missile.

Most of these drone aircraft were later destroyed during missile tests. Two survived to become JQB-47E for use in the testing of the Hughes AIM-47 long range air-to-air missile

In March 1960, even before delivery of the first A-12 prototype, Lockheed and the U.S. Air Force (USAF) discussed development of an interceptor version of the A-12. Designed as the AF-12 under project Kedlock, the interceptor featured a Hughes ASG-18 pulse-Doppler radar system and launch bays for three AIM-47 missiles. A second crew position, located just behind the cockpit, accommodated a Fire Control Officer (FCO) to operate the missile launch system.

The aircraft’s mission was to intercept new Soviet supersonic bombers long before they reached the United States. The Air Force initially envisioned a fleet of as many as 100, but only three were built and delivered during 1963-64. Secretary of Defense Robert McNamara cancelled Kedlock in early 1968 as a cost-cutting measure, and the aircraft were never deployed operationally.

CIA was involved with the project only in giving up three A‑12 airframes and helping write “black” contracts. The Air Force bore all the costs of the YF-12A, which was superseded by the F-111. Two of the aircraft were given to the National Aeronautics and Space Administration (NASA) for research, and one was converted into a trainer for the SR-71 program.