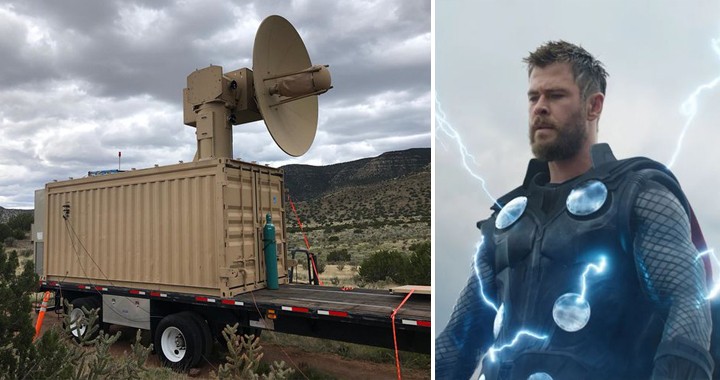 In the twenty-first-century, drones play a crucial role. Smaller ones can perform reconnaissance, while larger ones can engage the enemy with ordinance.

In recent years, small drones have made their way onto battlefields where they’ve been used to surveil US forces or drop bombs on them, prompting the US military to develop new ways to take them down.

US Air Force unveiled a new tool that can be stationed at bases around the world: a high-powered microwave system called Tactical High Power Microwave Operational Responder (THOR), which is designed to protect bases against swarms of drones.

The U.S. Air Force, and to be more accurate the Air Force Research Laboratory – scientific research organization operated by the United States Air Force Materiel Command, has disclosed details of the development of a new counter-swarm high power weapon that should cause those with nefarious intentions of using drones against United States forces at U.S. military installations at home or overseas to think twice about such actions.

“The god of thunder would be proud to hear how our team is dealing with small unmanned aircraft systems. They’re doing it, with THOR,” the AFRL tweeted.

The god of thunder would be proud to hear how our team is dealing with small unmanned aircraft systems.

They're doing it, with THOR: https://t.co/r9bF9NqaYC#AFResearchLab #THOR #UAV #Defense pic.twitter.com/DqPXejoDTD

“THOR is essentially a high-powered electromagnetic source that we put together to specifically defeat drones,” said Stephen Langdon, chief of the High-Powered Microwave Technologies Branch of AFRL’s Directed Energy Directorate.

A demonstration system has been built and tested on military test ranges near Kirtland AFB where it has successfully engaged multiple targets. Further testing against a larger set of drone types in swarming configurations is being planned.

THOR stores completely in a 20-foot transport container, which can easily be transported in a C-130 aircraft. The system can be set up within three hours and has a user interface designed to require very little user training. The technology, which cost roughly $15 million to develop, uses high power electromagnetics to counter electronic effect. When a target is identified, the silent weapon discharges with nearly instantaneous impact.

Rather than being used just as harmless hobby systems, drones can also be employed as weapons intended to cause harm at long standoff ranges. As they become more common and technically mature, it is important that there be a safe way to protect air bases against these threats.

With much of the necessary basic research previously completed at AFRL, THOR was rapidly developed and tested in 18 months.

Although there are other drone defensive systems available, including guns, nets and laser systems, THOR looks to extend the engagement range to effect and decrease the engagement time over these other deterrent devices.

Langdon said the THOR team hopes to transfer the technology to a System Program Office soon in order to get it into the hands of U.S. warfighters as soon as possible.

The Air Force began testing THOR against short-range targets earlier this spring, while another system, the Counter-Electronic High-Power Microwave Extended-Range Air Base Air Defense (CHIMERA) is designed to hit things at medium to long ranges. That system is expected to be delivered sometime next year.

The military predicts that a major problem will be swarms of drones operating in concert when it wouldn’t matter if one or two are taken down. This system is effectively designed to take out a large number of drones all at once and has a further range than bullets or nets. THOR program manager Amber Anderson says that the system “operates like a flashlight,” and that anything caught in the beam “will be taken down … in the blink of an eye.”

Taking out a drone is a difficult proposition: they’re small and difficult to hit with a gun, and if they’re flying over people, there’s a risk that they could be injured by falling debris or pieces of drone. That hasn’t stopped people from trying a variety of methods for taking them down, from conventional defensive systems to nets, eagles, and even shotgun-wielding drones. The US Army has begun looking for similar systems. It invested in a microwave weapon built by Lockheed Martin back in August 2018, while other parts of the Department of Defense have been testing other defensive systems, like lasers, which could be used against drones or missiles.