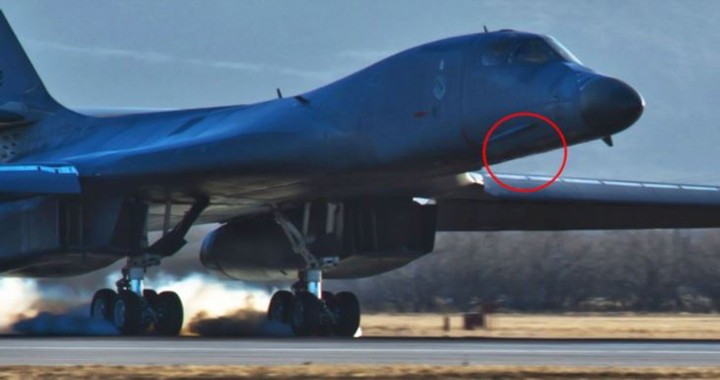 on Oct. 4, 1989, a B-1B Lancer from Dyess AFB performing a successful emergency landing on lakebed runway #33.

B-1 From the 96th Bomb Wing was forced to make an emergency landing. Suffering a hydraulic failure, the front landing gear refused to deploy. With no other choice, they needed to land as is.

As reported on that day in a New York Times article, the bomber landed at Edwards AFB after an increasingly desperate 12-hour flight in which the crew struggled unsuccessfully to lower the landing gear in the plane’s nose.

With its nose tilted upward, the plane landed on the main gear beneath its wings then rolled down the runway shortly after 6:15 P.M.

Seconds later, the nose sank slowly onto the runway, kicking up a huge trail of dust as the bomber skidded to a stop.

The bomber took off from Dyess AFB at 8:38 A.M. to perform a routine training mission.

Noteworthy the problem with the landing gear was discovered three hours later. 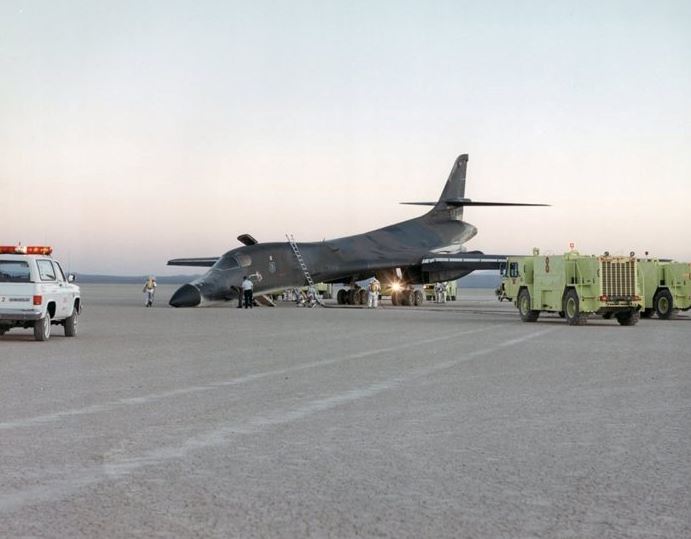 After several hours of efforts to release the gear, the U.S. Air Force (USAF) ordered the crew to fly the plane to Edwards, 60 miles northeast of Los Angeles, where the Rogers Dry Lake bed provided a wide, long natural runway.

As you’ll see, in the Video below the pilot did a tremendous job leveling off the plane once the rear wheels touched down, only lowering the nose when the plane was coming to a full stop.

The damage amounted to the forward radar antenna being ripped off and some cosmetic damage. The plane was back in the air by January of the following year.

The crew was uninjured and the bomber suffered only slight damage to the underside of the nose. 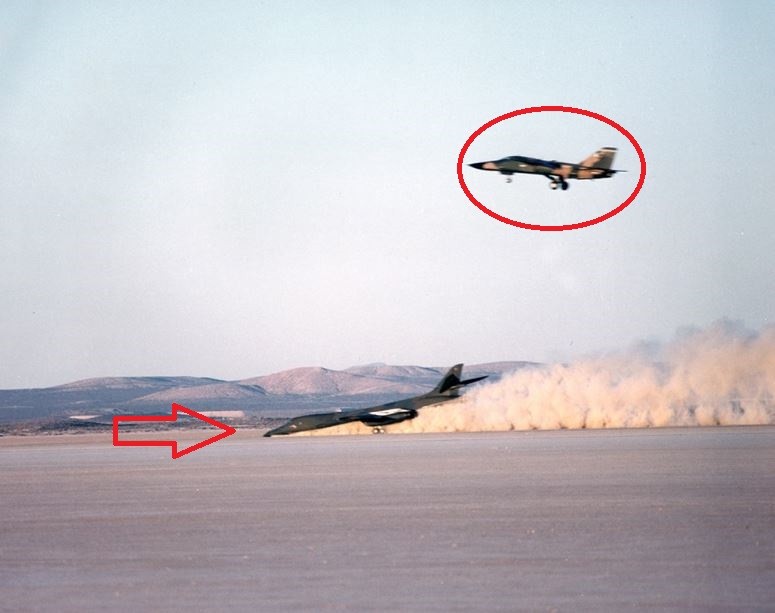 B-1 Lancers are considered the fighter jets of bombers if that makes sense. They’re capable of carrying up to 125,000 lbs. of ordnance at a speed of Mach 1.25, making it one quick, mean, butt-kicking machine. Bones as they’re often called, have been known to buzz enemy positions and stop fights, as the enemy know what this bird is capable of.

Even if at the time officials of the Strategic Air Command (SAC) which operated the bomber fleet, said there had been no prior problems with landing gears, the incident was one of the many problems that plagued the bomber since it went into development in the early 1970’s.

In fact three of the 100 planes delivered to USAF by its manufacturer, the Rockwell International Corporation, crashed since the plane went into service in 1985. The plane has also been hampered by fuel leaks, mechanical problems with its variable-geometry wings and shortcomings with its sophisticated defensive systems.