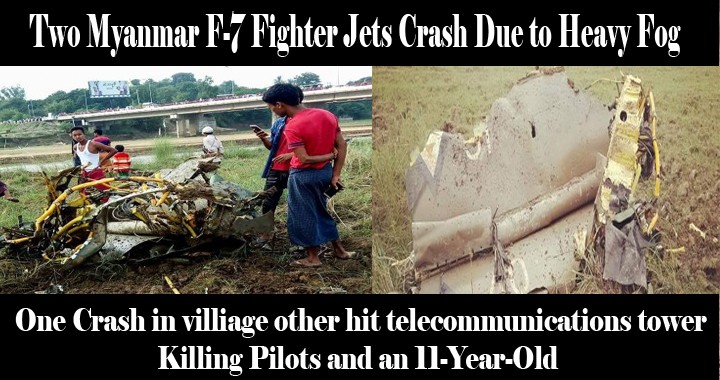 “One crashed into a creek while another crashed near a village,” in Minbu Township in the Magway region, regional official Myint Zaw told Anadolu Agency by phone.

Two Myanmar fighter jets crashed in separate incidents 20 minutes apart this morning, one clipped a telecoms tower and killed a young girl. In April, a pilot flying the same type of jet also crashed and was killed: https://t.co/mQdAnYEjUb

Poor visibility caused one F-7 jet to fly into a telecommunications tower near Magway air force base more than 500 kilometers northwest of Yangon, an air force official told AFP.

“He had no time to eject,” said the official, who did not want to be named.

A 10-year-old girl, who was studying at home, was hit by a piece of the plane after it struck the tower, lawmaker Kyaw Swan Yee from nearby Min Buu town said.

“She died after arriving at the hospital,” he said.

A 10-year-old girl, who was studying at home, was hit by a piece of the plane after it struck the tower https://t.co/UfuujjKJrK

In the other incident – which occurred just 16 kilometers away – the pilot managed to eject from his plane but was killed when he hit the ground, according to the official.

The pilots were named as Captain Hein Thu Aung and Captain Phyo Maung Maung, both in their thirties.

Magway’s chief minister and a delegation of lawmakers paid their respects to the girl’s family, Kyaw Swan Yee said.

The crashes are the latest aviation catastrophes to blight the country’s air force.

It is unclear why the jets crashed in the same place at the same time, he said, suggesting that one jet hit a cellphone tower or crashed to avoid hitting it.

The pilots’ bodies were found near the crash sites, he said, adding that a student who was studying at her teacher’s house was also killed.

“She was seriously injured by parts from the crashed plane, and died minutes later,” said Myint Zaw.

Two other students were also slightly injured, he added.