The B-52D was returning to Georgia from Massachusetts after an earlier Chrome Dome airborne alert to Europe. Near Meyersdale, Pennsylvania, on a path east of Salisbury, Pennsylvania; and after altitude changes to evade severe turbulence; the vertical stabilizer broke off.

Here is the story of “Buzz 14” Final Flight:

It was the height of the Cold War–less than two years after the Cuban Missile Crisis had brought the world to the brink of a nuclear holocaust. The missile crisis (and Russia’s growing fleet of ballistic missile submarines) were a grim reminder that the nation’s nuclear forces were at risk from a surprise attack, potentially destroying them on the ground before they could retaliate.

To reduce that threat, the Commander-in-Chief of Strategic Air Command, General Thomas Power, organized airborne alert missions involving long-range bombers, carrying nuclear weapons, and KC-135 tankers that refueled them in mid-air. These flights were conducted under various programs with such nicknames as “Hard Head,” “Head Start,” “Round Robin” and of course, “Chrome Dome.”

The mission was non-stop; at any given moment, nuclear bombers were flying sorties over the Mediterranean or the polar regions of northern Canada and Greenland, waiting for the authorization to launch nuclear strikes against Russian or Warsaw Pact targets. Scheduled refuelings from KC-135s kept them in the air, and the bombers typically carried extra crew members, allowing them to carry out sorties that often lasted more than 24 hours.

Related Article: When a US Bomber Jet Crashed in Greenland—With 4 Nukes on Board

The plane had suffered mechanical problems during its Chrome Dome mission, forcing an emergency landing at Moron, Spain. But after some temporary repairs, the crew flew on to Westover for additional maintenance. At that point, the original crew had reached the end of their duty period, so a second group, led by Major Thomas McCormick, flew to Westover to ferry the B-52 back to Turner, where it would go back on the flying schedule in a few days.

The flight was considered routine. In fact, SAC only needed a partial crew to return the plane to Georgia. The rest of McCormick’s crew consisted on Captain Parker Peedin, the co-pilot; Major Robert Townley, the radar navigator; Major Robert Lee Payner, the navigator and Technical Sergeant Melvin Wooten, the gunner. Wooten who normally sat in the tail of the B-52D would fly “upfront” with the rest of the crew, occupying the seat normally reserved for the electronic warfare officer (EWO).

Over southeastern Pennsylvania, Buzz 14 encountered severe turbulence. In contact with the Cleveland Air Traffic Control Center, Major McCormick requested a descent to lower altitude, in hopes of finding smoother air. It was a futile effort; conditions at 29,000 feet were just as bad, with severe winds buffeting the B-52. Defense writer David Wood picks up the final moments of Buzz 14 in a 1999 article on the aircraft and its fate:

Only that note of frustration in McCormick’s voice – “and we’re still in it” – betrayed the chaos that erupted as Buzz One Four slammed into the storm front.

Until the indicated airspeed dial became an unreadable blur, it showed the aircraft staggering through 60‑mph vertical and sideways jolts. McCormick worked the throttles, hoping to dampen the wild gyrations as the plane rocketed up and down. His copilot, Mack Peedin, alternately pinned to his seat and yanked above it, wrestled with the control wheel, trying to keep the wings level.

Cleveland: “Buzz One Four, Cleveland, would you say again your remarks, I was talking to Washington on another line.”

Cleveland: “Buzz One Four, roger, stand by one.”

A minute later, Cleveland Center called back with clearance to return to 33,000 feet.

Buzz One Four’s reply was unintelligible, according to the official transcript of the conversation.”

Controllers later recalled hearing a series of sounds, including the rush of air, in the last transmission from the B-52. In a matter of seconds, the storm’s fierce winds snapped off the tail of the bomber, including its massive vertical stabilizer, sending plane rolling out of control. McCormick ordered his crew to bail out.

It was not the first time that a B-52 had lost its tail section in flight. Before that night over the mountains of southern Pennsylvania and western Maryland, there had been at least three other crashes involving that catastrophic structual failure; one one year earlier, a B-52 based at Westover went down on low-level training mission over Maine after turbulence caused the plane’s tail to snap off; only two of the nine crew members on the Buff survived.

And just three days before Major McCormick and his crew began their ferry mission, the Air Force conducted an experiment to confirm the B-52s vulnerability to structural failure.

A B-52H was configured for the mission, and a Boeing test pilot was placed behind the controls. Sure enough, when the test aircraft experienced severe turbulence, the vertical stabilizer snapped off in-flight. The Boeing pilot was somehow able to control the aircraft and land it; the B-52 was repaired and remained in service for another 46 years.

It’s quite likely that McCormick and his crew were unaware of the test flight–and its confirmation that B-52s could lose their tails in severe turbulence. They had learned that lesson in howling winds of a blizzard; now, the bomber was lost and their ferry mission quickly became a fight for survival.

Like all Buffs, Buzz 14 had a unique ejection system. The seats for the pilots, the EWO and the gunner fired upward while ejection seats for the navigator and radar navigator–located below the flight deck–fired downward. Major McCormick, his co-pilot Captain Peedin and TSgt Wooten, the gunner, all ejected successfully. Downstairs, for reasons still unclear, Major Townley failed to eject. His partner, Major Payne, cleared the jet and landed on the ground near Grantsville, Maryland, dazed by alive. McCormick and Peedin were also in relatively good shape, but Wooten was not as lucky. Bailing out of the stricken B-52, he struck a part of the aircraft, resulting in deep lacerations to the face and torso.

On the ground, the pilot and co-pilot took a look at their situation and decided to stay put, using their survival gear to decrease their exposure to the snow, wind and cold. Wooten and Payne began heading for nearby farmhouses, which offered the promise of warmth and assistance. They were miles apart and on their own.

But they never made it; severely injured, Sergeant Wooten crawled only a few yards before he had to stop and died of exposure in the storm. Major Payne was in better shape but in the darkness, he slid down an embankment into a local creek. Unable to climb out, he too, succumbed to the elements. When searchers found his body, he was on his knees in the creek, his head cradled in his arms, snow covering his summer-weight flight suit. The body of Robert Townley, the radar navigator who was unable to eject, was found in the wreckage of Buzz 14.

McCormick, the aircraft commander, made his way to safety the following afternoon. Before heading off to the hospital, he called his wife back at Turner AFB, providing the first indication that some of the crew had survived.

Captain Peedin was located 24 hours later; using his survival raft as an improvised shelter, Peedin came through the ordeal in relatively good shape. In fact, when rescuers finally made it to his location, they had to huddle around Peedin’s fire and warm up.

It’s worth remembering that much of the actual search and rescue work was conducted by local residents, who began mobilizing when they heard the crash and explosions at the height of the storm. Later, they erected monuments to the crew members who died, at the locations where their bodies were found.

The crash location is mentioned as “Savage Mountain, Garrett County (near Barton, Maryland) at coordinates 39.565278° North and 79.075833° West. Today Google Earth shows that as an empty farm field. Some news accounts said portions of the crash “were buried” at the crash scene, an unusual sounding practice for a crash of great significance and one that involved nuclear materials.

What about the nukes?

They also came through the crash in relatively good shape. An ordnance team from Fort Meade removed them from the site, and little (if any) radiation was released in the crash. An Associated Press writer who covered the incident remembers taking a train from Baltimore, then slogging his way to the rural crash site. Tired from his trek through the snow, the reporter took a seat on a large object that was half-buried in the ground, a short distance from the downed jet. “Where are the nukes?” the AP man asked a SAC officer on the scene. “You’re sitting on one of them,” he replied.

Despite the disaster in western Maryland, Chrome Dome missions continued for another four years until other incidents, off the coast of Spain and at Thule AB, Greenland, generated more negative publicity and brought the airborne alert missions to an end.

By that time, the Air Force had modified the tail sections of most of its B-52 fleet, strengthening bulkheads, reducing the tail’s surface area, and decreasing chances for an in-flight failure. 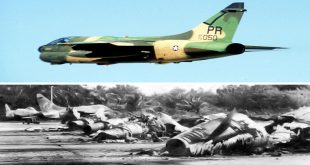 In this article, we will share with you the details of the 1981 Muñiz Air …