The U.S. National Guard Bureau has reported that it has partnered with a Hollywood special effects company to make future training more realistic for brigade combat teams during Exportable Combat Training Capability exercise

While BCTs already use variations of visual modifications – plastic, fiberglass, and sheet metal – to replicate enemy vehicles, these new kits are the first of their kind, said Maj. Aaron Ammerman, XCTC program manager for the NGB.

“Taking a look at how VisMods are done across the Army, I think these are the best I’ve ever seen,” said Ammerman. “They will provide an exponentially more realistic threat signature for troops to train against as they do force-on-force exercises.”

In 2018, NGB contracted Westefx in an effort to improve the XCTC program and its 21-day combat training exercises that ready units for mobilization. The company has provided special effects for movies such as “James Bond”, “Taken” and “Men in Black II”. They have also participated in approximately 50 XCTC rotations by providing battlefield effects, props and equipment for the military over the last 10 years.

“No enhanced battlefield training simulators can compare with the functionality, realism, durability and cost-effectiveness of this new VisMod vehicle,” said Brennan. “They are pretty amazing and we are really proud of them.”

The kits – each weighing approximately 1,700 pounds and fitting over the chassis of a Humvee – resemble the size and silhouette of the tank and personnel carrier but with an inflatable canvas-like frame.

Its gas-operated weapon systems simulate the firing of .50 Cal and 125mm main guns that can be configured to multiple integrated laser engagement systems. The MILES gear, along with the kit’s smoke generator, will enable Soldiers to track and simulate target acquisition.

While exponentially more realistic than previous VisMod vehicles, these kits also provide a more cost -effective alternative to the military than using actual tanks and personnel carriers. The Humvee cost less and the Army has more of them.

“A Humvee costs approximately $30,000 plus another maybe $5,000 to maintain for the year, whereas an M1A1 tank costs a lot more,” said Doramus. “It’s initial and maintenance expenses that make these kits a lot more cost-effective to do on Humvees than tanks or Bradleys. Plus the Army doesn’t just have 60 spare tanks sitting around somewhere.”

Doramus and a team of Idaho Guardsmen, mostly comprised of engineers and mechanics, helped Westefx install 12 completed kits onto Humvees at the Idaho Army National Guard’s Orchard Combat Training Center. The team has spent more than a year assembling and maintaining the fleet of 60 Humvees allocated for installation. NGB and Westefx plan to continue production of 48 more kits over the next three years. 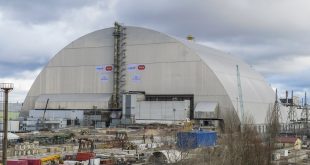 More than three decades after the worst nuclear accident in history, workers are still scrambling …