Indonesian Navy Training Aircraft Made Emergency Landing In The Pond 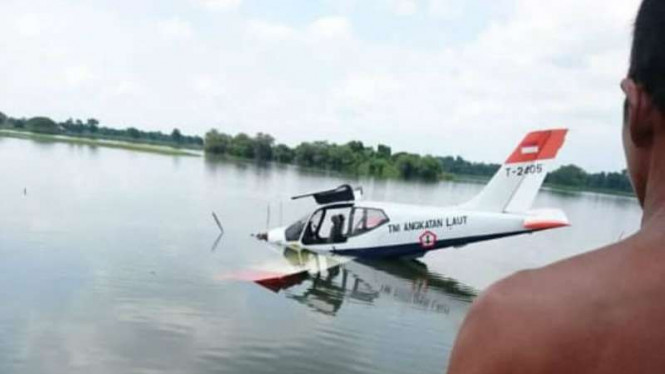 Indonesian Navy Socata TB-10 Tobago GT training aircraft made a forced landing in the water of a pond following a loss of engine power. Both occupants escaped unhurt.

Commander of the Navy’s Navy Aviation Center (Puspenerbal) First Admiral Edwin when confirmed in Sidoarjo confirmed the existence of the trainer’s emergency landing.

“It is true that around 13.10 WIB our train plane Tobago T2405 made an emergency landing and thank God the instructor and students survived. We are currently evaluating the aircraft and conducting further investigations,” he said after reviewing the train plane’s emergency landing location.

Hopefully, he said, tomorrow the aircraft evacuation process could be carried out.

“As for the crew, we have taken them to the base and thank God they were not injured and survived this emergency landing,” he said.

Alluded to the cause of the incident, he explained that he would conduct a further investigation process. “We will investigate,” he said.

He added, when the incident the plane was flying in the Bangil area, Pasuruan. “But, back again because there was something on the engine. But it hasn’t arrived yet,” he said.

As a result of the incident, guarding the access to the fishpond area was guarded by officers, because many residents wanted to get up close.