After five seconds, emergency backup power kicked in and the cockpit display screen was restored. Wang then tried to push the throttle forward to increase thrust, but there was no response, as the engine had come to a complete stop.

As he was only 272.7 meters above the ground, Wang realized there was no time to return to the base to land and that his jet would soon crash.

According to the Chinese state-run media, Wang steered the plane away from populated areas “three times” within 37 seconds and aimed it at a rice paddy before ejecting a mere 75.9 meters above the ground and safely landing in a nearby orchard.

After an investigation by the PLA, it was confirmed that the accident was caused by a bird’s impact on the engine of the fighter aircraft during takeoff, causing it to stall; however, the report did not mention the time and location of the incident.

The report did state that the pilot is a member of the PLA’s Southern Theater Command.

It is not certain what type of plane was involved in the incident, nor was a location or date given other than “early autumn.”

The only hint at the type of aircraft that might have been involved was that the stock image used in the article included a Chengdu J-10 taxiing on a runway. 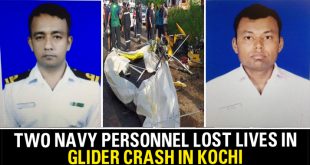 The Indian Navy ultralight trike crashed near Cochin NAS (VOCC) during a training flight. Both …