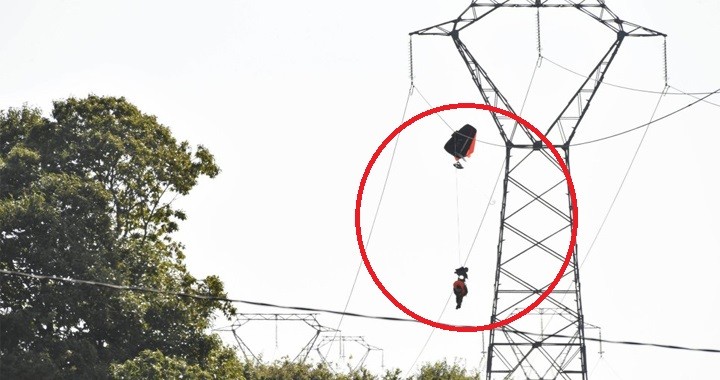 As we have reported earlier a Belgian Air Force F-16BM Crashed In A Residential Area In France After An In-flight Engine Fire.

F-16 fighter jet crashed damaged a house, setting a field ablaze and leaving a pilot suspended for hours from a high-voltage electricity line.

Emergency workers rushed to try to safely free the officer after his parachute became tangled on the line in Brittany only after cutting off power to avoid him being electrocuted.

Pilot’s parachute got caught on a 250,000-volt high-tension electricity line.

Local media broadcast images of the pilot dangling below the line. He was rescued by emergency crews with the help of technicians from an electricity company.

No injuries have been reported. Surrounding homes were evacuated as the pilot was being taken down and firefighters battled the blaze from the crash.

One of the plane’s wings sliced the roof and facade of a house in the town of Pluvigner, in Brittany, before plunging into a neighbouring farm field, said Ludovic Kauffer, who lives in the house.

The plane was flying from Belgium to a naval airbase in France when it came down between the towns of Pluvigner and Landaul, according to a statement from the regional prefecture, or administration.

A French national police spokeswoman said no injuries had been reported among local residents.

About 100 police officers were investigating the crash site, she added.

Firefighters were called to the crash at 10.38am local time, according to French media reports.

Images from the scene showed flaming wreckage from the jet had caused damage to at least one home.

The F-16 Fighting Falcon is a single-engine supersonic aircraft originally developed for the US air force and that first went into service in 1973.