Amid growing criticism over her decision to include U.S.-made aircraft, the minister told Sueddeutsche Zeitung newspaper that the F-18s will “serve as bridging technology” to replace capabilities that would otherwise be lost when the German Luftwaffe’s old Tornado fleet is grounded.

On Monday, defense ministry spokesperson Arne Collatz-Johannsen said that Germany would purchase aircraft from both the E.U. and U.S. manufacturers and that “fewer than a third” would be American.

To retire the present fleet of Tornado aircraft, the Luftwaffe must maintain certain capabilities, and Kramp-Karrenbauer told the German daily “it has to be said, that currently, only U.S. manufacturers are offering” the capacity to carry nuclear weapons.

The plan, disclosed by German Defence Minister Annegret Kramp-Karrenbauer on 21 April, would appear to satisfy the Luftwaffe’s three separate combat aircraft procurement requirements that are each due to see new platforms introduced into service in the mid-2020s.

Under Kramp-Karrenbauer’s numbers, reported by the AFP news agency, the Luftwaffe would seemingly receive 55 Eurofighters and 30 Super Hornets for the Tornado replacement requirement; 38 Eurofighters for Project Quadriga; and 15 Growlers for luWES. Though this breakdown has not been confirmed by the German government, and it should be noted that luWES has not even been formally launched yet.

For the Tornado replacement programme, the Luftwaffe is looking to retire its 90 Tornado Interdiction and Strike (IDS)/Electronic Combat Reconnaissance (ECR) aircraft from 2030.

A request for proposals (RFP) for 85 new aircraft to perform 10 current Tornado missions and two additional but undisclosed missions (one of which is understood to be the nuclear delivery mission) was issued in early 2018.

Previous Ukrainian Air Force Mi-8 Helicopter Made A Forced Landing After Birdstrike
Next F-14 Tomcat 50th Anniversary: Cradle Of Aviation Museum To Receive The Last F-14 To Ever Fly 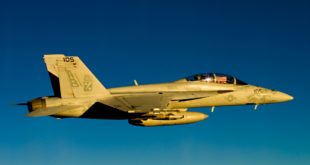