In response to the Bloomberg report, the director of Russia’s Federal Service for Military-Technical Cooperation (FSVTS) told Rossiya 24 television on Mar. 16 that Moscow has not received an official confirmation from Jakarta regarding the cancellation for its order of 11 Su-35 fighters.

“There is no official cancellation of the [Indonesian] order [for the Su-35s],” Shugayev told the Russia 24 news channel. “We haven’t received any papers regarding the issue and haven’t been told about it.”

Shugayev said Indonesia is still interested in acquiring the Su-35s, adding, “We hope that the contract will be implemented.” No further details were provided.

The contract for the acquisition of 11 Su-35 fighter jets by Indonesia was signed on February 14, 2018 in Jakarta. The value of the contract is $1.154 billion, of which 50% ($570 million) is covered by counter-shipments of Indonesian goods (which were not actually to be delivered to Russia, but to be sold on the international market).

The official was also quoted as saying that, as recently as February, Washington had also pressured Indonesia into walking away from talks with China to procure several naval patrol vessels for about USD200 million, adding that the moves “illustrate how the US is having some success – at times by using financial and economic levers – in deterring countries from dealing with Russia and China, which the [Donald] Trump administration has identified as the biggest threats to US national security”.

In November 2019 that Indonesia’s procurement of the Su-35s had stalled due to several factors, including the Indonesian presidential election held in April of that year, funding and countertrade issues, and concerns in Jakarta about US legislation – notably the Countering America’s Adversaries Through Sanctions Act (CAATSA) – under which Washington seeks to penalise defence customers of Russia

Previous F-12 Fighter-Interceptor: What Could Have Been the World’s Fastest Ever Combat Aircraft
Next Why Are Russian Military Aircraft Flying In Irish-controlled Airspace Post-Brexit? 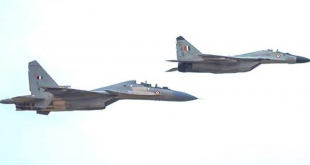