According to the new contract, the Russian Air Force will get the Sukhoi Su-34M, which is the latest version of the jet. The Su-34M with several advanced features has been modernised based on the operational experience.

“A contract was signed between the Defense Ministry and the Sukhoi Aircraft Company on building about 20 Su-34 frontline bombers,” the source said.

The report added that the contract involves standard Su-34 aircraft with certain alterations based on the experience of the operation of several dozen bombers of this type earlier purchased for the troops.

The aircraft will integrate the latest avionics suite developed under the Sych experimental design work, the source said.

The Sych experimental design work was completed in 2019 and, in particular, “it envisages installing underslung reconnaissance containers on Su-34s,” the source specified.

“Also, the range of air-launched weapons, which the Su-34 will be able to employ, increases significantly in the process of this work,” the source said.

The Su-34 multirole supersonic fighter-bomber is designated to strike both ground-based and air targets day and night in any weather conditions. As its basic armament, the plane carries air-to-surface and air-to-air missiles.

Conceptualised and based on the Sukhoi Su-27, the first Su-34 took to the skies in 1990 and was intended for the now-defunct Union of Soviet Socialist Republics Air Force. However, after the breakup of the USSR, the programme suffered a setback. The programme was later revived and the first Su-34 joined the Russian Air Force in 2014.

Unlike other twin-seater combat jets in which the two crew sit in one behind the other, the Su-34 pilots have side-by-side seating in their armoured cockpit. Powered by two Saturn AL-31FM1 series 23 twin-circuit turbojet engines, the Su-34’s primary task is to destroy ground, surface and air targets using a range of unguided and guided munitions.

Su-34’s armament includes a 30 mm Gryazev-Shipunov GSh-30-1 autocannon with 180 rounds and missiles, rockets and bombs on its 12 hardpoints. 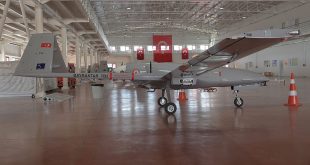