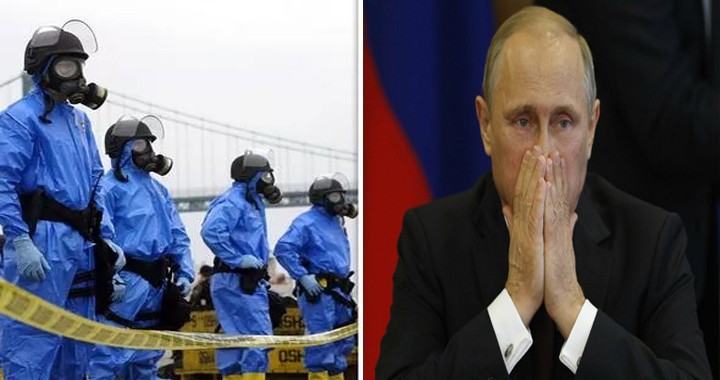 A RUSSIAN naval base is on a mysterious lockdown after an accidental missile explosion at the base was linked to a sudden radiation spike in the region.

The world is on alert after a rocket engine explosion on a naval test range in northern Russia was linked to a shock radiation spike.

The Kremlin have confirmed the “rocket engine explosion” two people and injured six. There are mounting concerns that the explosion took place during the testing of a new nuclear missile.

Radiation levels peaked between 11:50 and 12:30 (08:50-09:30 GMT) before falling and normalising by 14:00, the city administration in Severodvinsk said on its website, without reporting how significant the spike had been.

Local authorities warned radiation levels spiked for about 40 minutes after the blast, but say these have since returned to normal. The increase only saw radiation reach 2 microsieverts per hour, up from 0.11. But neither reading can cause radiation sickness.

It is unclear what could have caused radiation levels to rise. Local people were reportedly urged to take precautions against radiation.

Adding to the fears, the Archangelsk base where the explosion took place has since been placed on emergency lockdown, with the nearby White Sea also closed.

A Russian expert told the BBC that the Russian Ministry of Defence has refused to disclose the details behind the mysterious lockdown of the base.

Navy officials are keeping shipping way from nearby Dvina Bay for one month, but some officials claimed this was a planned closure and had nothing to do with the recent explosion.

The launch site near Nyonoksa has seen a wide range of weapons tests for the Russian navy.

Killer weapons such as sea-launched Intercontinental ballistic missiles. Cruise missiles and anti-aircraft missiles are tested at the base.

The incident was the second to hit Russia in the space of a week after another explosion caused havoc on Monday.

Tags Emergency lock-down of Russian base Is Putin covering up a nuclear disaster? nuclear missile accident Radiation levels spike What is Putin hiding?