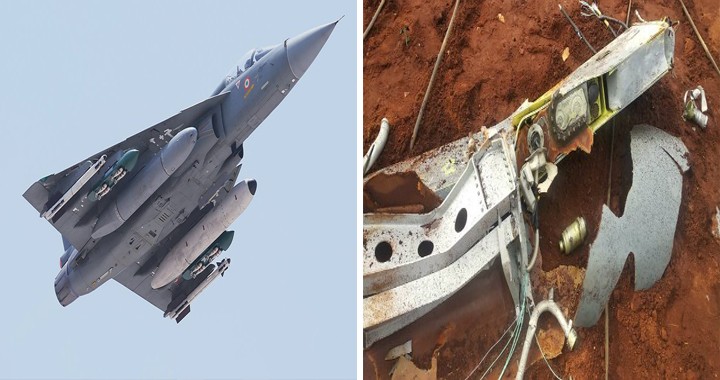 The fuel drop tank of a Tejas fell off mid-air during a routine sortie from the Sulur air base near Coimbatore on Tuesday morning.

The aircraft landed safely after the incident. No damage was reported on the ground.

The impact on the field reportedly created a three-foot crater and parts of the tank were scattered across the area. The impact caused a scare for workers on the field and at a nearby cement godown.

Labourers in Irugur village were shocked to see the 1200-litre petrol tank fall from the sky. Police said it caused a three-foot deep crater and a minor fire, news agency PTI reported.

Air Force officials said the cause of the incident is being investigated.

Breaking: External Fuel tank of the LCA Tejas aircraft of the Indian Air Force fell down in farm near Sulur air base in Tamil Nadu during a flight today. First such incident involving a #Tejas@VinodDX9 @Aryanwarlord @I30mki @vgmenon99
pic.twitter.com/4XGqozO1GL

Tejas is the first advanced fly-by-wire fighter aircraft designed, developed and made in India. Manufactured by Bengaluru-headquartered Hindustan Aeronautics Limited (HAL), it is equipped with a satellite-aided Inertial Navigation System.

The aircraft has a digital computer-based attack system and autopilot mode. It can fire Air-to-Air Missiles and Precision Guided ammunition.

In a similar incident last week, an IAF Jaguar was forced to jettison fuel tanks and small-sized practice bombs over part of a residential neighborhood in Ambala in Haryana, after it was hit mid-flight by a bird.

Last month, flight operations at Goa’s Dabolim International Airport were stopped for two hours after a detachable fuel tank attached to a MiG-29K aircraft fell on the runway, spilling fuel and sparking a fire.