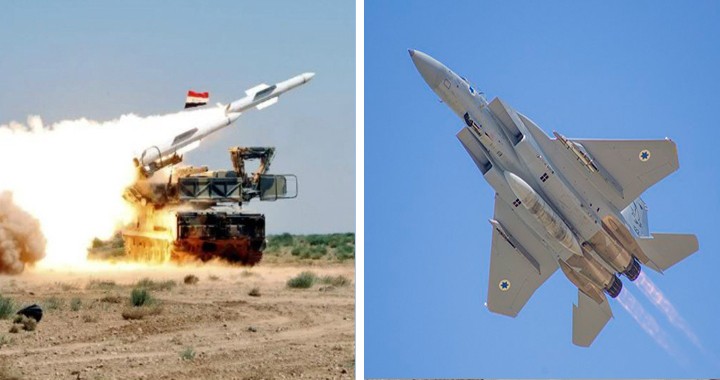 Israel’s military confirmed the attack in a statement posted on social media on Monday, saying it had been in retaliation for an anti-aircraft fire at an Israeli fighter jet earlier on Monday.

The statement called the incident abnormal, as the attack took place in Israeli airspace, “a violation of Israeli sovereignty” in the Golan Heights.

Earlier today, a Syrian anti-aircraft system fired at an IDF aircraft as it was carrying out a routine flight in Israel. The projectile landed in Syrian territory. In response, we targeted the Syrian launcher that was responsible for firing it.

Also, a report in the Lebanese media outlet Al Mayadeen said an israeli drone struck a reconnaissance compound in southern Lebanon. An additional report said the Lebanese army was at the scene investigating the compound, which is said to be Israeli.

According to Syrian state media, one officer was killed and two others were wounded in the strike

The report added that Syrian air defense attacked an unmanned aerial vehicle that entered Syrian airspace near the southern suburb.

Residents in the Golan Heights that they heard military jets and blasts from the nearby border with Syria.

Prime Minister Benjamin Netanyahu also commented on the incident, saying that “the Syrian military tried to attack an Israeli aircraft and failed.” He added that Israel has a zero-tolerance policy when it comes to attacks against it, “and we will respond to it fiercely and forcefully.”

The Israeli air attack comes amid soaring tensions in the region between Israel’s arch foe Iran and the United States.

The standoff has been simmering since US President Donald Trump withdrew from the landmark 2015 nuclear treaty between Iran and several major world powers.

In recent days, the US has accused Iran of alleged threats and last week deployed an aircraft carrier group and B-52 bombers to the nearby Gulf.