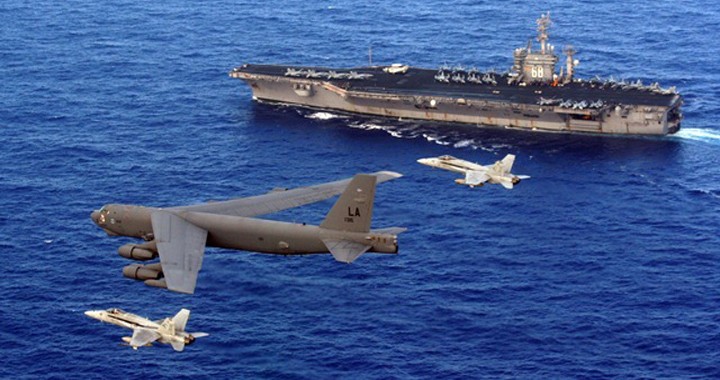 IRAN has threatened to attack Israel in retaliation for any strike by US military forces in the Persian Gulf.

Speaking to reporters the Iranian Parliament’s vice-speaker Ali Motahhari said the military forces based in the region had started a ‘psychological’ war in the region and warned the US against an attack on the Middle Eastern nation.

The comments come after the Pentagon deployed the USS Lincoln, the fifth Nimitz-class aircraft carrier, F-15 Fighter jets and B-52 bombers to the Persian Gulf to counter alleged threats.

Mr Motahhari told FARS news agency: ‘The US military forces’ deployment in the Persian Gulf is more of the nature of psychological warfare. They are not ready for a war, specially when Israel is within our range.’

His comments resonate with those of the head of the Revolutionary Guard’s air force Amir Ali Hajizadeh who called the move a ‘serious threat’ and said that if the US decided to make a move, Iran would be forced to retaliate.

Speaking to the Iranian Students’ News Agency he said: ‘An aircraft carrier that has at least 40 to 50 planes on it and 6,000 forces gathered within it was a serious threat for us in the past.

‘But now it is a target and the threats have switched to opportunities.

‘If [the Americans] make a move, we will hit them in the head.’

In addition to having allies Hezbollah in Lebanon and the Palestinian Islamic Jihad in the Gaza Strip, Iran also has a number of explosive missiles aimed at Israel making the country a dangerous threat.

Fearing that ‘anything could happen’ former finance Minister of Israel Yuval Steinitz told Ynet news: ‘Things are heating up. I wouldn’t rule anything out. Iran may fire rockets at Israel.’

He added: ‘The American sanctions are breaking the neck of the Iranian economy, and a new and stronger wave [of sanctions] is still to come.’

On Sunday it was revealed that President Trump had increased economic pressure on Iran and was looking to cut off all its oil exports in a bid to get Tehran to curb its nuclear and missile programs.