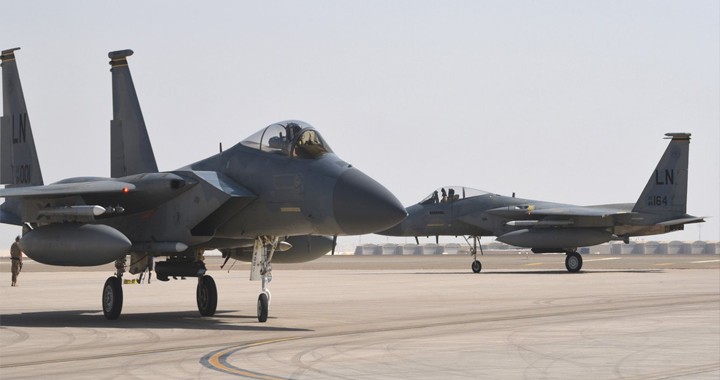 The U.S. Air Force has deployed F-15C Eagle fighter jets to the Middle East Amid Accusations Of Iranian Threats

On May 9, 2018, Air Forces Central Command announced the arrival of the F-15Cs. It is unclear how many Eagles the Air Force has deployed to the Middle East or may be planning to send in the near future.

They also each carried an AN/AAQ-33 Sniper Advanced Targeting Pod (ATP) on the centerline, which offers a long-range visual identification capability for the F-15C, which you can read about more here.

This follows the arrival of four B-52H Stratofortress bombers and the early appearance in the Persian Gulf of the Nimitz-class aircraft carrier USS Abraham Lincoln and her strike group, all ostensibly in response to still largely unclarified threats to American forces in the region from Iran and its proxies.

See Details:  U.S. deploying bombers and aircraft carrier in the Middle East after indications Iran planned an attack on US forces

“U.S. Air Force fighter squadrons enhance regional partnerships and demonstrate a continued commitment to regional security and stability,” a caption to one of the photographs read. “These aircraft were moved within the theater to be best positioned to defend U.S. forces and interests in the region.”

The buildup is officially in response to intelligence that showed unspecified threats from Iran and its various regional proxies against American forces throughout the Middle East.

Since Bolton’s initial announcement, media reports, citing unnamed sources have suggested that the intelligence came by way of Israel and that it involved details about the movement of ballistic missiles in the region by sea.