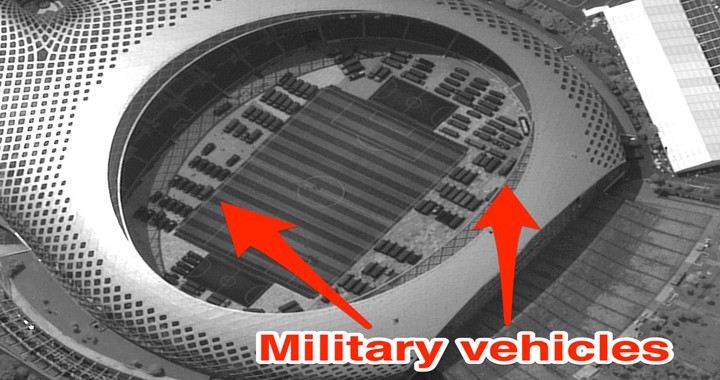 Satellite photos taken over Shenzhen, China, close to the border with Hong Kong, show amassed military vehicles being held in a football stadium near the Hong Kong border

Hong Kong has been engulfed in protests since early June, at first to oppose the now-shelved extradition bill that would have allowed Hong Kong to send suspects to other jurisdictions, including mainland China.

The protest movement is now in its tenth week. On Monday and Tuesday, activists forced Hong Kong’s international airport to shut down on two consecutive days.

The images, published by The Associated Press, show more than 100 vehicles, which appear to be large trucks, gathered in the soccer stadium at the Shenzhen Bay Sports Center. The pictures were taken on Monday, the AP said.

The images come 24 hours after the Global Times, China’s state-run tabloid newspaper, published a compilation of footage showing the military trucks assembling in Shenzhen “in advance of apparent large-scale exercises.”

The Chinese military, believing in the intel and these videos, have set in place a comprehensive military operation targeting the situation in #HongKong. #HongKongProtests #China #Democracy pic.twitter.com/QWFM11XYKC

Chinese security forces have been gathering in the city of Shenzhen in recent days, an apparent show of force as mass protests continue to roil Hong Kong.

The Chinese government has released footage that appears to show military vehicles driving towards the Hong Kong border.

Video showed numerous armored personnel carriers, trucks, and other vehicles belonging to the Chinese People’s Armed Police Force, a paramilitary force responsible for riot control and counterterrorism, parading through the streets of Shenzhen.

The Global Times also noted in its report that 12,000 police officers, tanks, helicopters, and amphibious vehicles gathered in Shenzhen on August 6 for what appeared to be anti-riot drills.