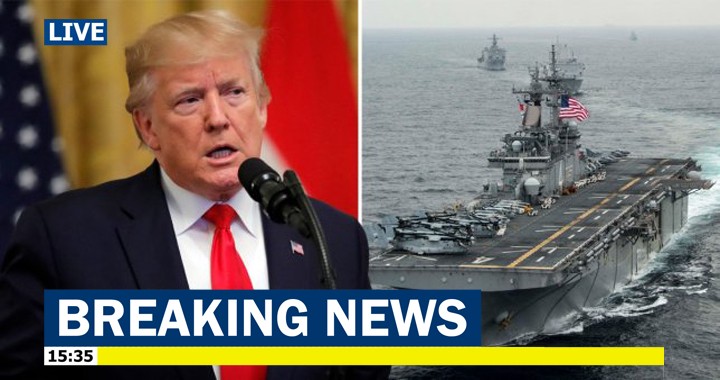 In remarks at the White House on Thursday, US President Donald Trump said the drone had flown to within 1,000 metres of the USS Boxer and had ignored “multiple calls to stand down”.

“This is the latest of many provocative and hostile actions by Iran against vessels operating in international waters. The US reserves the right to defend our personnel, facilities and interests,” Trump said.

“The drone was immediately destroyed,” he added.

U.S. Marines jammed an Iranian drone and bringing the aircraft down and destroying it. It was the latest in a series of tense incidents between Washington and Tehran.

“We have not lost any drone in the Strait of Hormuz nor anywhere else. I am worried that USS Boxer has shot down their own UAS [Unmanned Aerial System] by mistake!” he wrote.

Hours earlier, Iran’s Foreign Minister Mohammad Javad Zarif, who was in New York for meetings at the United Nations, said he had “no information about losing a drone”.

The Pentagon said in a statement that the USS Boxer, an amphibious assault ship, had taken “defensive action” against an Iranian drone at 10am local time (07:00 GMT) on Thursday.

The incident took place in international waters while the ship was transiting the Strait of Hormuz to enter the Gulf, it said.

The Boxer is among several US Navy ships in the area, including the USS Abraham Lincoln, an aircraft carrier that has been operating in the nearby North Arabian Sea for weeks.

In June, Iran shot down a US military drone in the area.

Iran has been blamed by the US for attacks on tankers which have happened in the world’s key shipping area since May. Tehran denies all the accusations.

Related Article: Two Oil Tankers on fire off the coast of Iran after apparent torpedo attack

The recent incidents have triggered fears of a military conflict in the region.