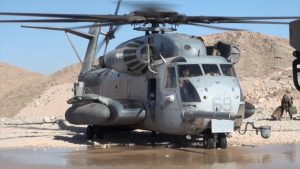 Ian Gregor The public affairs manager for the Federal Aviation Administration confirmed that the US CH-53E military helicopter CRASHES in Plaster City California .

All Four crew member aboard ( US Marine) died in crash

The Marine Corps said a CH-53E Super Stallion from the 3rd Marine Aircraft Wing at MCAS Miramar crashed “in the vicinity” of El Centro Tuesday at around 2:35 p.m.

Public affairs officer for NAF El Centro, Kristopher Haugh, said: “Our thoughts and prayers go out to the brave service members and their families affected by this incident.