The People’s Liberation Army Air Force of China and its sister branch, the PLA Naval Air Force, operate a huge fleet of around 1,700 combat aircraft—defined here as fighters, bombers, and attack planes. This force is exceeded only by the 3,400 active combat aircraft of the U.S. military. Moreover, China operates a lot of different aircraft types that are not well known in the West.

Chinese media continuously keeps telling the world about China’s fast-emerging aircraft industry. However, most Chinese military aircraft are inspired by or copied from Russian or American designs, so it’s not too hard to grasp their capabilities if you know their origins.

Practically all aircraft in the People’s Liberation Army Air Force (PLAAF) are, either foreign-made or authorized/ unauthorized reverse-engineered copies. Stealing foreign military technology has now become a regular habit and a strategic weakness. In this manner China skips expensive and time-consuming R&D.

China’s J-31 program is still under development, possesses a greater operational range and larger payload capacity than the F-35 it was based on. There is an expectation that the J-31 will become China’s primary carrier-based fighter once it reaches full production, replacing the PLA-N’s troubled J-15 once it enters service. Like the J-20 program, the J-31 is limited by China’s inexperience with stealth aircraft. Aesthetically, the J-31 seems to borrow heavily from both the F-35 and F-22 programs, suggesting that it may be lighter and more maneuverable than America’s top-tier fighter.

The J-20, China’s first fifth-generation fighter, was purpose-built not only to serve as a competitor for America’s F-22 Raptor but in many ways, as a direct copy. Plans for the Lockheed Martin design were stolen by a Chinese national named Su Bin, who was sentenced to 46 months in federal prison for his crime. The repercussions of his efforts on behalf of the Chinese government will live on for decades. Aside from the obvious addition of forward canards on the J-20, the two aircraft look nearly identical thanks to China’s access to classified F-22 development data, but as is often the case, the similarities seem to end with the aesthetic. American defense experts have said that China’s J-20 will have a far larger radar signature than the F-22, but other variables may ultimately render any American advantages moot. The U.S. canceled the F-22 program in 2011 with fewer than 200 built. China, on the other hand, will continue to produce J-20s in large quantities for years to come.

In the 1980s, the U.S. partnered with Israel to develop a new combat aircraft based on the General Dynamics F-16. But as costs rose, the U.S. pulled out of the deal, leaving Israel’s “Lavi” fighter unfinished. Years later American officials discovered that Israel sold Lavi’s development plans to China, granting them unprecedented access to technologies first developed for the F-16. The J-10 shared more than a striking visual resemblance with the F-16.

The technology sourced through Israel allowed China to advance significantly over the 1960s era fighters they were fielding at the time. This would not be the last Chinese fighter to incorporate elements of the F-16, but it’s the most direct. An updated version of the J-10 entered into service last year with an advanced fire control radar array, increased use of composite materials to reduce weight and a number of other domestically developed updates that aim to keep the J-10 capable for decades to come.

As the Soviet Union neared collapse in 1989, China seized the opportunity to secure the production line for the Sukhoi Su-27, an air superiority fighter developed to counter American jets like the T-14 Tomcat. The Soviets, keen to sell China a new MiG design instead, were left with little choice in the face of looming economic ruin. China quickly set about producing their own Su-27s and then improving upon the design to develop what would become the J-11. Unlike other fighters China employed at the time, the Su-27 brought advanced avionics systems and fly-by-wire technology that China was also able to incorporate into later platforms. In 2000, Russia sold China a number of advancements they’d made to their own Su-27 platform, and China’s subsequent effort to incorporate them alongside domestically developed technologies has since resulted in the J-16—a modified and updated Su-27.

China’s J-15 serves as their primary carrier-based aircraft, and if China had gotten their way, it would have been produced originally by simply purchasing the production line for the Su-33 (which is Russia’s carrier-capable version of the Su-27). When the Soviets refused to part with their Su-33 design secrets, China purchased a Su-33 prototype aircraft from Ukraine, dubbed the T-10K-3, and quickly set about reverse engineering it. The result is a carrier-based fighter that shares the Su-33’s folding wing design and overall appearance coupled with a few Chinese improvements like incorporating more composite materials to reduce overall weight.

China’s J-7 was essentially a MiG 21 platform. After access to F-16 design specs through Israel’s “Lavi” program, China mixed the two technologies to create an aircraft that some contend is greater than the sum of its parts. Elements of both aircraft can be seen in the FC-1 (JF-17 in Pakistan), with the F-16’s nose and tail joined by a distinctly MiG-21 wing design. The latest variant of the JF-17 now include AESA radar, air-to-air refueling capabilities, greater use of composite materials, fly-by-wire technology and latest Chinese AAMs.

While there is no definitive publicly available evidence to support America’s claims that China’s Caihong-4 (CH-4) armed drone is based on stolen plans for the General Atomics MQ-9 Reaper, seeing is believing. The resemblance is striking but similarities are only skin deep. Despite clearly being modeled after the American UAV, the CH-4 boasted fewer outboard stations for mounted ordnance while delivering comparable flight characteristics and duration, suggesting that it’s propulsion system is not as capable as those fielded on the Reaper. However, China promptly set about working to match the Reaper’s capability within their own drone program, leading to the newer and more robust CH-5, which is an updated version of their first attempt at copying the American platform.

The Xi’an Y-20 is a large military transport aircraft project was officially launched in 2006. The aircraft is more commonly known by its nickname Chubby Girl because its wide fuselage in comparison to other Chinese aircraft previously developed. Y-20 started ground testing in December 2012, including runway taxi tests. The aircraft made its maiden flight lasting one hour on January 26, 2013. In June 2016, the first two Xian Y-20 aircraft were delivered to the PLLAF. Twenty Y 20s have been built till date. On 13 February 2020, the Y-20 was part of a fleet used to deliver supplies and personnel to Wuhan. Similarities with C 17 in basic design are very visible.

In the 1950s and early 1960s, the Soviet Union shared most of its conventional weapons technology with China. The MiG 21 was a contender. However, the Sino-Soviet split abruptly ended the initial cooperation, and by September 1, 1960, the Soviets withdrew their advisers, resulting in the project being stopped in China. Later Soviet Premier Khrushchev unexpectedly wrote to Mao Zedong in February 1962, offering to transfer MiG-21 technology. The Chinese viewed this offer as a Soviet gesture to make peace, but were suspicious. A delegation headed by the commander-in-chief of the People’s Liberation Army Air Force (PLAAF), himself a Soviet military academy graduate, went to Moscow. The technology transfer deal was signed. Several MiG-21s were sent to China, flown by Soviet pilots, and China also received some MiG-21Fs in kits, along with parts and technical documents. However, Chinese discovered at Shenyang aircraft factory that the technical documents provided by the Soviets were incomplete and that some of the parts could not be used. China then disassembled a few MiG 21s and began reverse-engineering the aircraft for local production. They claim to have found and solved 249 major problems and reproduced eight major technical documents that were not provided by the Soviet Union. The F-7s were the very last production MiG-21s, and about 2,400 were manufactured, some as recently as 2013.

The Chinese effort to develop their own an all-weather interceptor began in full in 1964 and this produced the first Chinese-designed and built jet fighter to combat new, high altitude threats including the Lockheed U-2 spy plane. In 1964 the PLAAF asked for a fighter/interceptor to counter bombers and spy planes as the newly introduced Chengdu J-7, they felt was incapable of doing so. The prototype took its maiden flight in 1969. Despite the mid-1960s origins of the J-8, due to the political turmoil of the Cultural Revolution, the J-8 was not produced until 1979 and entered service in 1980. Its basic configuration resembles an enlargement of the delta-winged J-7, and had two Liyang (LMC) Wopen-7A turbojet engines, and could fly to Mach 2.2. It was clearly derived from the MiG 21 design. The subsequent variants J-8II had the side air intake copied from the MiG 23 or American F-4 Phantom. In fact it was more a copy of the Sukhoi Su-15. At one point nearly 300 were in service. 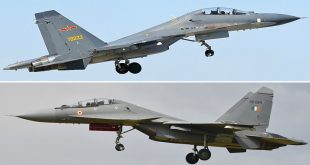