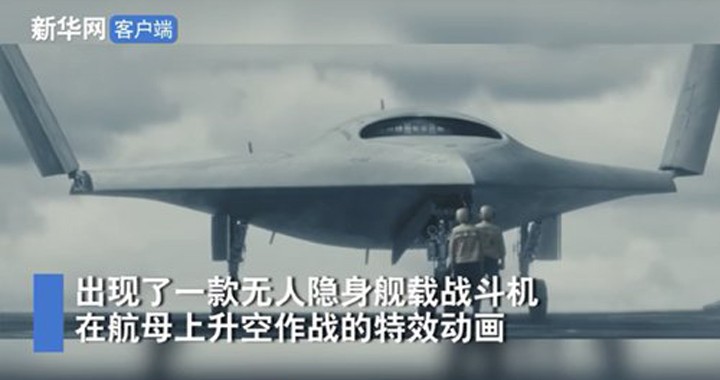 Chinese fighter jet manufacturer Shenyang Aircraft Corporation offered a glimpse into the future of what a flying wing stealth drone might look like for use with aircraft carriers, Global Times reported.

To mark the 50th anniversary of Shenyang J-8’s maiden flight, the company, under the state-owned Aviation Industry of China, released a promotional video highlighting past achievements and providing a look into the future.

In the latter part of the video, which turned from real life documentary to computer-generated images, a stealth drone featuring a flying wing design was shown operating on an aircraft carrier. The drone seems large, as its landing gear is as tall as a person, the video showed.

This was also part of an AVIC promotional video first shown at Airshow China in Zhuhai, South China’s Guangdong Province in November 2018.

But military observers at that time said that video was considered highly conceptual so they did not relate it to an actual aircraft by Shenyang Aircraft Corporation.

The company has rich experience in designing ship-based aircraft and is also capable of developing flying wing aircraft, so people are looking forward to seeing the drone turn into reality, a Chinese military expert who asked not to be named told the Global Times.

The anonymous expert said that aircraft carrier-based drones can be used in land attacks, aerial refueling, and intelligence gathering missions.

A flying wing design provides advantages like high stealth capabilities and high lift-drag ratio under subsonic cruising, the expert said, noting that other countries are also developing flying wing drones, including the US X-47B and MQ-25.

Chinese military enthusiasts are also interested in China’s next-generation manned aircraft on carriers, with reports saying the company’s made-for-export FC-31 stealth fighter jet might be modified and become an option.

When asked about the latest development of the FC-31 at an anniversary event, Sun Cong, the fighter jet’s chief designer, said jokingly, “No news is good news,” according to an article published in AVIC’s WeChat account.

According to GlobalSecurity.org, the J-8 was the first PLAAF fighter aircraft of domestic design, with design work beginning in 1964.

The J-8 was armed with two cannons and two air-to-air missiles, accompanied with a more powerful radar with increased search distance, the report said.