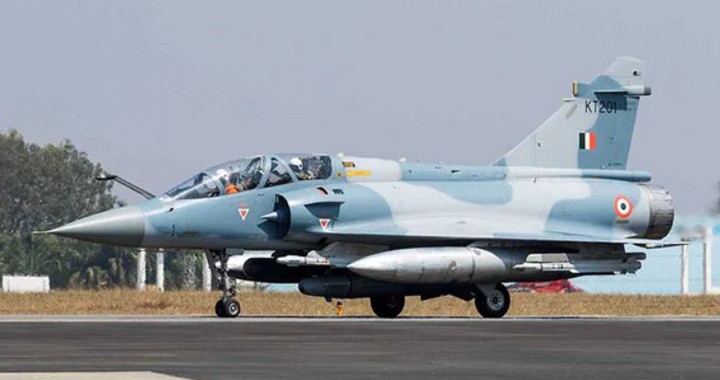 The 2019 Balakot airstrike was conducted by India in the early morning hours of February 26 when Indian warplanes crossed the de facto border in the disputed region of Kashmir and dropped bombs in the vicinity of the town of Balakot in Khyber Pakhtunkhwa province in Pakistan.

After the Airstrike, few Indian media Outlets claims that more than 350 terrorists died in the Airstrike. However, later India foreign minister in a media conference said that No Pakistani Citizen or Soldier Died In IAF Balakot Air Strike

After the Airstrike, a huge debate started on the effectiveness of IAF Balakot Air Strike. A Satellite Imagery shared by  Australian publication The Strategist Suggested that IAF Balakot Airstrike was a ‘Very Precise Miss’

Here is the answer to that question Due to heavy cloud cover Indian Air Force fighter jets were unable to Fire Crystal Maze missile during Balakot Airstrike. The key Israeli air-to-surface missiles called the Crystal Maze, which would have provided a live video feed of the weapons hitting their targets

“The weather suddenly turned bad, there were clouds… heavy rain. There was a doubt about whether we can go in the clouds. During a review (of the Balakot plan), by and large, the opinion of experts was – what if we change the date. I had two issues in mind. One was secrecy… second, I said I am not someone who knows the science. I said there is so much cloud and rain. There is a benefit. I have a pearl of raw wisdom, the clouds can benefit us too. We can escape the radar. Everyone was confused. Ultimately I said there are clouds… let’s proceed.”

The clouds did, in fact, affect the operation as the Indian jets couldn’t launch six Crystal Maze missiles that day. These missiles were meant to beam back footage as they struck their targets. Though the Air Force did hit targets using Spice munitions, the video feed of the Crystal Maze strike, meant to showcase the destruction of the terror camp, never materialised because of clouds that day.

Experts say ‘reliable’ BDA or bomb damage assessment could not be gathered since the missile with the video feed was not launched due to clouds. Air forces around the world use this assessment to see the results of any air strike.

The IAF’s Mirage 2000 fighters, which made a shallow incursion across the Line of Control and did manage to launch five SPICE 2000 penetrator glide bombs, which might have struck their targets, though they did not bring down the buildings they struck.

The Spice 2000 bombs were aimed at “four targets, of which three were hit. One [was hit] with three [bombs] and the remaining two with one bomb each,” said a source familiar with the operations that day.

However, unlike the Crystal Maze, which the IAF’s pilots could not launch that day, the SPICE 2000 glide bombs were not configured to provide the launch aircraft with a live video feed as they approached and struck their targets. Consequently, the IAF could not play out the actual video of the strikes in public and had to rely upon, instead, on assessing the success of the operations through high-resolution satellite images procured from a friendly strategic partner. Confidentiality clauses have prevented the IAF from showcasing these images in public. It is unclear if additional non-classified, high-resolution satellite imagery of the strikes have been acquired and whether these will be showcased in public in the future.

Sources familiar with the IAF’s attack on the Jaish-e-Mohammed terror camp have told NDTV that the presence of low clouds prevented the launch of six Crystal Maze missiles meant to accompany the SPICE 2000 glide-bombs. “The Crystal Maze have not launched as the missile works on the pilot flying the missile to the target. The weather conditions of undercast clouding precluded this.” Once launched, “the Crystal Maze requires acquisition of [the] target visually by the pilot in the last phase of the attack.” In other words, the weapon flies to its target based on pre-fed Global Positioning System (GPS) coordinates but requires the pilot of the launching platform to manually steer it to its precise point of impact through an electronic data-link between the launch aircraft with the weapon.

The IAF planned to use the Crystal Maze in conjunction with the SPICE 2000 penetrator bombs. “The Crystal Maze [was meant to target the] top floor and the SPICE for the first and ground floors.” Used together, the smart weapons were meant to comprehensively eliminate all the terrorists and bring down the entire structure.

The lack of video or photographic evidence has proven to be problematic for the Indian Air Force, particularly after satellite images of the Jaish camp released a day after the strikes appear to show intact structures with only a handful of signs of clear bomb damage.