An unmanned aerial vehicle of the OSCE SMM to Ukraine spotted Russian cutting-edge radio-electronic jamming systems in the occupied territories of eastern Ukraine.

The OSCE Special Monitoring Mission to Ukraine (SMM) has released the image of modern Russian jamming systems in eastern Ukraine. 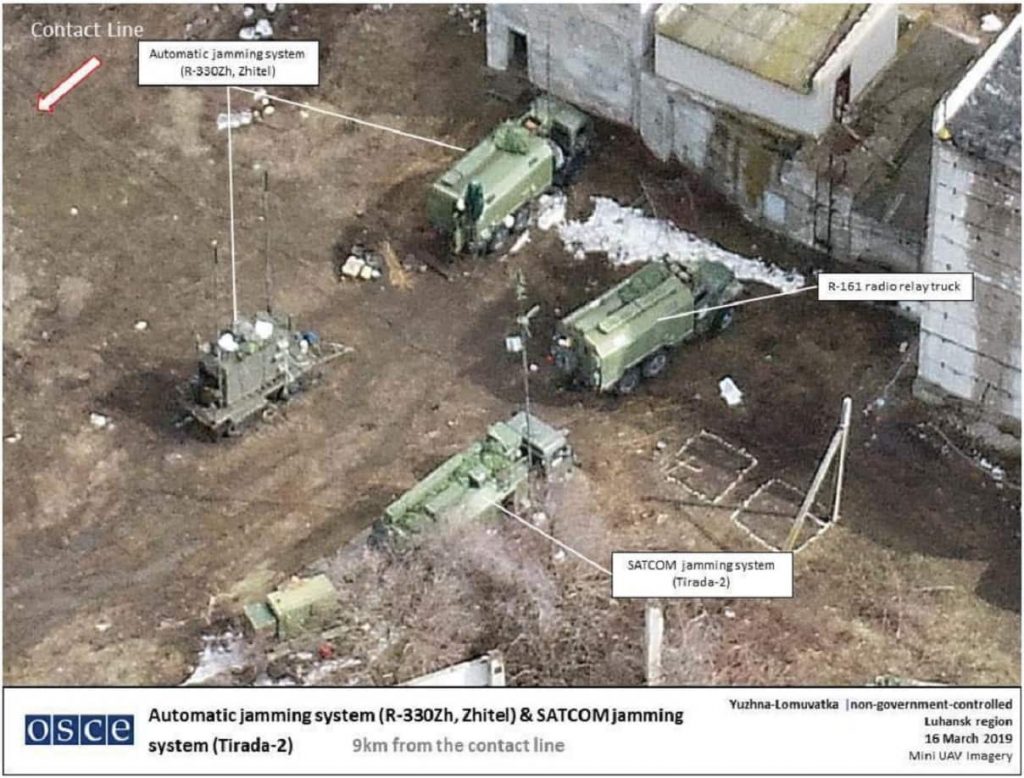 A statement from the OSCE Special Monitoring Mission claims that the modern Russian radio intelligence and the jamming system has been spotted near Yuzhna-Lomuvatka (60km west of Luhansk).

“An SMM mini-UAV spotted an automatic jamming system (R-330Zh, Zhitel) on a KamAZ-4310 and a radio-electronic jamming complex (Tirada-2) near Yuzhna-Lomuvatka (60km west of Luhansk)”, said in OSCE’s statement.

“On March 16, an SMM mini-UAV spotted an automatic jamming system (R-330Zh, Zhitel) on a KamAZ-4310 and a radio-electronic jamming complex (Tirada-2) near Yuzhna-Lomuvatka (60km west of Luhansk),” reads the report of the OSCE Special Monitoring Mission to Ukraine (SMM), based on information received as of 19:30, 18 March 2019.

On February 10, the OSCE SMM spotted a modern Russian radio intelligence system TORN in the occupied parts of Donbas. This system is one of the latest Russian developments used exclusively by the Russian Armed Forces.

It is worth noting that if R-330Zh spotted in Ukraine, not for the first time, then the newest complex Tirada-2 has become a real surprise.

The Tirada-2 is one of the most modern systems of this type in Russian Army service. This is warfare jamming system specialized in disabling communication satellites. Some experts report that the Russian army uses this system to counter US high-altitude Global Hawk drone that repeatedly been spotted flying hours-long spy missions over eastern Ukraine.

“The development of this system began in 2001. The first time it was publicly announced in 2017. In August 2018, at the Army-2018 Forum, a contract for supplying the Russian Ministry of Defense with these latest EW systems was publicly signed, and in the autumn they were tested,” reported Ukrainian InformNapalm OSINT.