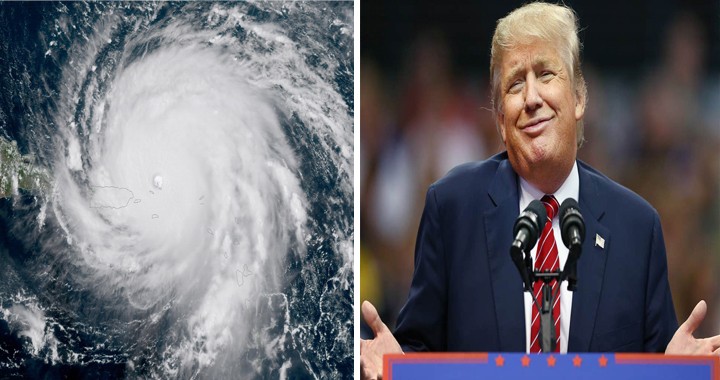 President Donald Trump has suggested dropping nuclear bombs into hurricanes to stop them from causing damage to the US, the news website Axios reported.

Donald Trump has reportedly suggested on more than one occasion that the US military should bomb hurricanes in order to disrupt them before they make landfall.

“They start forming off the coast of Africa, as they’re moving across the Atlantic, we drop a bomb inside the eye of the hurricane and it disrupts it. Why can’t we do that?”

Quoting unnamed sources who were present at the meeting, Axios report that the response from one official was “We’ll look into this.”

On Sunday, the White House declined to comment on the Axios report. “We don’t comment on private discussions that the president may or may not have had with his national security team,” it said.

On Monday, from the G7 summit in France, Trump passed comment of his own.

“The story by Axios that President Trump wanted to blow up large hurricanes with nuclear weapons prior to reaching shore is ridiculous,” he tweeted. “I never said this. Just more FAKE NEWS!”

Axios reported that Trump raised the same issue on another occasion with a senior administration official. This conversation was apparently recorded in a 2017 national security council memo which used the term “nuclear” in reference to the conversation.

Axios quoted a senior official who defended Trump’s ability to ask tough questions: “His goal – to keep a catastrophic hurricane from hitting the mainland – is not bad. His objective is not bad.”

This isn’t the first time the idea has been suggested — it was first floated by a scientist during the Eisenhower era — but experts widely agree that it wouldn’t work, Axios said.

A 2016 National Geographic article explains that, besides being labeled as “wacky” by the physicist Robert Nelson, such a move would be prohibited under a nuclear treaty signed between the US and the former Soviet Union.

And a National Oceanic and Atmospheric Administration fact sheet said that radioactive fallout from a nuclear explosion in a hurricane would have a devastating environmental impact.

“Needless to say, this is not a good idea,” it said.