Following reports of F-117(s) spotted flying in Nevada and Eastern California this week, Dutch aviation“Scramble” Magazine is now reporting that four of the retired stealth aircraft were actually conducting classified air strikes over Syria as recently as 2017.

It seems that the F-117, maintained in operational status to be used when needed, according to the “reliable sources” who talked with Scramble, had some taste of combat again, some ten years after their official retirement, in the Syrian/Iraqi theater. 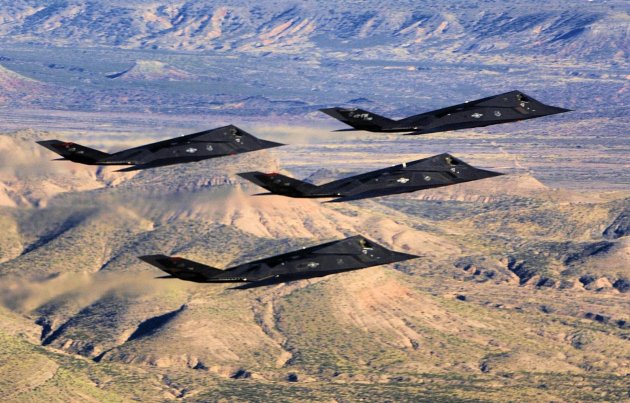 According to the reputable Dutch aviation magazine:

Back in 2017, and not publiced by any other source so far, Scramble received very reliable information that at least four F-117s were deployed to the Middle East as an operational need emerged for the USAF to resurrect the stealth F-117 for special purposes. One of the deployed aircraft was involved in an in-flight emergency and landed far away from its temporary home base that was likely located in Saudi Arabia, the UAE or Qatar.

During this extremely covert deployment the four Nighthawks flew missions above Syria an Iraq with Small Diameter Bombs (SDBs).

Indeed, you don’t keep just a handful of these jets airworthy if you don’t think they could be useful some day: it would simply cost too much. Just think at the maintenance issues related to maintaining the RAM (Radar Absorbent Material) as well as the training required to fly the aircraft.

However, the U.S. Air Force has been using F-22 stealth aircraft over Syria and Iraq for years now, so why committing a somehow obsolete and very well-known design as part of a covert deployment? Was there an ultra-well defended target to strike? Or was there the need to test a new RAM, coating or system, fitted to the F-117, against a real target for a real-life test?

As mentioned above, there is also the possibility some F-117s were converted into UCAV (Unmanned Combat Aerial Vehicles): drones able to deliver ordnance.

What if those deployed to the Middle East were UCAVs being tested operationally? Continuing in such a speculation one might believe the appearance of the piloted F-117 over Nevada last week, with the pilot giving a “hang loose” gesture to the photographers was a way to deceive analysts, observers who believe rumors of a Nighthawk turned into drone.

Whatever, it would be interesting to know more about this presumed covert deployment. Our Scramble friends might release additional details soon.

Previous Moscow’s Weapon that can be used If U.S. Goes to War with Russia
Next Cessna 182S Skylane crashed in Franklin County pond, 3 Dead