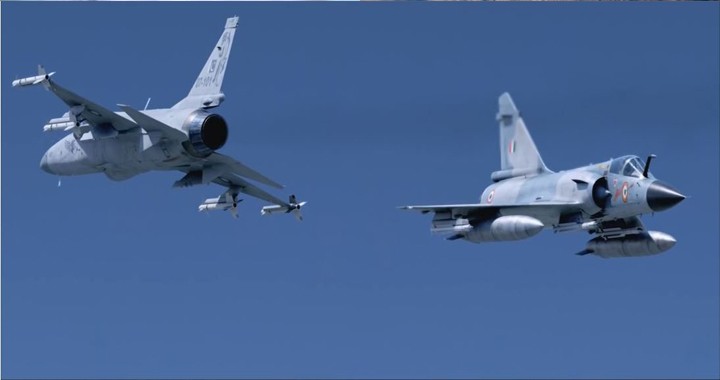 In 2002 American spy thriller film The Sum of All Fears an Israeli A-4 Skyhawk jet carrying a nuclear weapon was shot down. 29 years later, a Syrian scrap collector uncovers it in the Golan Heights and sells it to a South African black market arms trafficker named Olson. He then sells it to a fascist group led by Austrian billionaire and neo-Nazi Richard Dressler, whose aim is to start a nuclear war between the United States and Russia that will devastate them both, and leave a united Fascist Europe to rule the world.

Here is the Video of Scene

Threat of ‘loose nukes’ hangs over Subcontinent in the similar manner too.

In response to indian Airstrike On February 27, 2019 Around 9.30 am PAF conducted a counter Airstrike in India

The Fighter jets shot down in last week Aerial encounter was only carrying conventional weapons.

What if in future both countries shot down a Fighter jet carrying nuclear weapons and  ‘loose nukes’ . The risk of rogue elements gaining control of nuclear weapons is higher in that situation

We can only hope that the two countries will find a diplomatic solution to this latest conflict and avoid any further escalation. If things were to spiral out of control and lead to the use of nuclear weapons, it would be something that would threaten all of humanity.

Pakistan reportedly has between 140 and 150 total warheads, all of which are fission types, or atomic bombs, rather than fusion or thermonuclear devices, more commonly known as hydrogen bombs. Pakistan presently has a mix of nuclear-capable medium-range ballistic missiles.

India reportedly consists of around 130 and 140 warheads, again all fission types. The Indian military has deployed nuclear-armed short-, medium, and intermediate-range ballistic missiles, which form the core of its present nuclear force.

The PAF has two dedicated units (No. 16 Black Panthers and No. 26 Black Spiders) operating 18 aircraft in each squadron (36 aircraft total) of the JF-17 Thunder, believed to be the preferred vehicle for delivery of nuclear weapons. These units are major part of the Air Force Strategic Command, a command responsible for nuclear response. The PAF also operates a fleet of F-16 fighters, of which 18 were delivered in 2012 and confirmed by General Ashfaq Parvez Kayani, are capable of carrying nuclear weapons. With a third squadron being raised, this would bring the total number of dedicated nuclear capable aircraft to a total of 54. The PAF also possesses the Ra’ad air-launched cruise missile which has a range of 350 km and can carry a nuclear warhead with a yield of between 10kt to 35kt.

A 2016 report by Hans Kristensen stated that “The F-16s were considered to be the first planes that are nuclear-capable in the Pakistan arsenal and the French mirage was upgraded as well to carry a new air launch cruise missile. But the United States made its case. What Pakistan does once they get the planes is inevitably up to them,” he said. The report also stated that Pakistan is obliged under the terms of its contract to ask the US for permission before the fighters are converted. To date, the US has given only two countries (Pakistan and Israel) implicit permission to modify their F-16s to carry nuclear warheads.

It has also been reported that an air-launched cruise missile (ALCM) with a range of 350 km has been developed by Pakistan, designated Hatf 8 and named Ra’ad ALCM, which may theoretically be armed with a nuclear warhead. It was reported to have been test-fired by a Mirage III fighter and, according to one Western official, is believed to be capable of penetrating some air defence/missile defence systems.