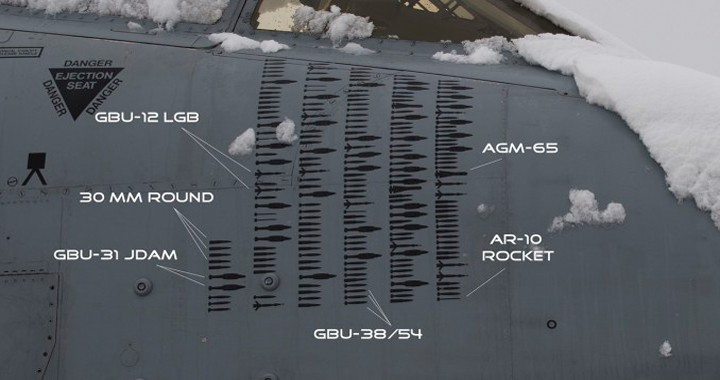 The use of victory markings originated during World War II and frequently took the form of the roundel or national flag of the nationality of the aircraft defeated.

The interesting image in this post was taken on Oct. 24, 2016, when A-10 Thunderbolt II Attack Aircraft serial number 78-0624 returned home from a 6-month tour of duty in support of Operation Inherent Resolve

Many different types of bomb markings were spotted on A-10 Thunderbolt II belonging to the 124th Fighter Wing (Idaho ANG), from Gowen Field, Boise, Idaho

The image contains a mix of missiles, guided bombs and rockets, that complement the A-10’s GAU-8 Avenger 30-mm hydraulically driven seven-barrel Gatling-type, there are GBU-12 Paveway LGBs (Laser Guided Bombs), AGM-65 Maverick missiles, GBU-38 JDAMs (Joint Direct Attack Munitions) and GBU-54 laser-guided JDAMs (both based on a Mark-82 500-lb bomb – the -54 differs from the -38 for the distinctive laser seeker – according to our sources the marking is the same), the 2,000-lb GBU-31 JDAMs and the AGR-20 laser-guided rockets used with the LAU-131A/A rocket launcher.

By the way, there are 124th FW aircraft that sport more bomb markings than 78-0624: in particular, in 2016, 78-0633/ID had an impressive amount of stickers applied to the area just below the right side of the cockpit. Take a look at the following photo dating back to 2016:

Many People ask this question that bombing marking include the quantity of bomb dropped or Different types of bombs dropped. Here is the answer to that question

This may vary from deployment to deployment, one A-10 pilot told us that usually, 30mm bullets represent 100 rounds, bomb stickers represent two bombs of that kind, whereas rockets and missiles represent one of each. “If we applied one sticker for each bomb expended in combat we would cover all the aircraft!

Related Article: The A-10 Warthog that killed a Cow during a Close Air Support Mission

Operation Inherent Resolve was is the U.S. military’s operational name for the military intervention against the Islamic State of Iraq and Syria.

Previous India-Pakistan Patch-War: Here’s All the uniform patches of PAF – IAF Airstrike made so far
Next 309 AMARG Could be the Second Largest AIR FORCE In The World 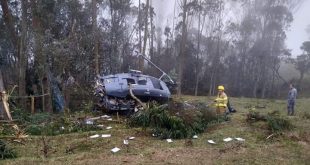