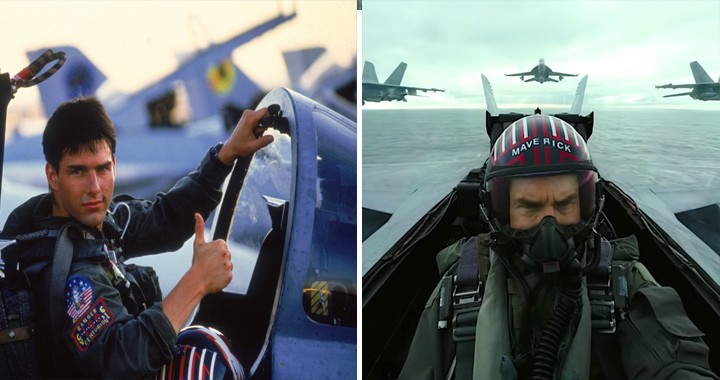 on Jul. 18, 2019 In a surprise appearance, Tom Cruise took the stage at Paramount Pictures’ Comic-Con panel to introduce footage from Top Gun: Maverick, his long-awaited follow-up to Top Gun

In Top Gun: Maverick, trailer you’ve seen scenes of Tom Cruise rocketing off an aircraft carrier and fighter jets cruising in close formation over the water.

The New  Top Gun: Maverick  trailer is pure nostalgia peppered with plane stunts. The trailer opens on a desert plain with a jet rising to course over it. Ed Harris’ voiceover is heard “Thirty-plus years of service…you can get promoted or retire, but you refuse to die.

You should be a two-star admiral, yet here you are a captain.”

Related Article: Here’s Why Tom Cruise is Still Captain after 30 plus year of service in Top Gun

Then images of Cruise in the iconic leather jacket, racing on the motorcycle, singing in the bar with his buds, Jon Hamm stepping on the airfield as a commander, and shots of Cruise flying in a snowy caravan.

“Maverick you should be headed to extinction,” says Harris and Cruise answers “Maybe so, sir, but not today.”