In the above video, you can see a U.S. Marines conducted a live-fire training.

U.S. Marines is  Using  FIM-92 Stinger against uav drone targe on the beach

The FIM-92 Stinger is a launch surface to air missile US short-range used to achieve the helicopters or aircraft at low altitude combat. It is like ” fire and forgets “.

on 21 May 1982 an SAS soldier engaged and shot down an Argentine Pucará ground attack aircraft with a Stinger.

On 30 May, at about 11.00 a.m., an Aerospatiale SA-330 Puma helicopter was brought down by another missile, also fired by the SAS, in the vicinity of Mount Kent.

on September 25, 1986 engineer Ghaffar, of Gulbuddin Hekmatyar’s Hezb-i-Islami, brought down the first Hind gunship  near Jalalabad

According to the 1993 US US Air Defense Artillery Yearbook, the Mujahideen gunners used the supplied Stingers to score approximately 269 total aircraft kills in about 340 engagements, a 79-percent kill ratio

on 3 May 1993 a Sukhoi Su-24M was shot down with a Stinger fired by fundamentalists. 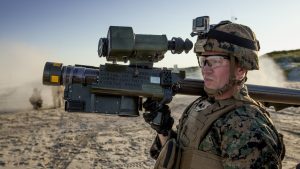