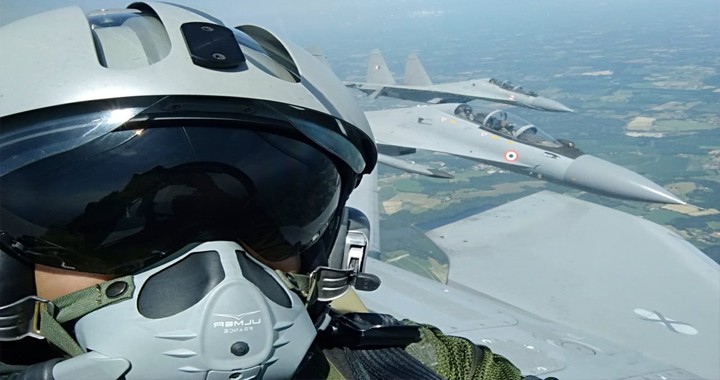 A French Air Force pilot had the rare opportunity to fly an Indian Su-30MKI air superiority fighter designed in Russia during Garuda VI joint French-Indian air exercises – and he appears to have enjoyed the flight.

The pilot took a sneak peek into one of India’s most modern warplanes developed by Russia’s Sukhoi aircraft manufacturer during a familiarization flight in the first week of this year’s Garuda exercises held between July 1 and 12.

#ExGaruda2019 : The objective of Indo-France joint exercise is to share good practices & to enhance interoperability & cooperation between the two Air Forces.

The man even took a midflight selfie from the cockpit of the two-seat fighter jet. “Great Aircraft!” an unofficial French fighter squad account on Twitter wrote. In exchange, an Indian squadron leader was able to fly a French Rafale jet.

A FIGHTER jet pilots snapped selfies as they were behind the controls of the warplanes capable for flying Mach 2.

A French Air Force Pilot got an opportunity to fly in the Su-30MKI aircraft, during the integration flying training week. pic.twitter.com/RJstvqKZAm

The Garuda-VI joint Indo-France drills began at the French Air Force base at Mont-De-Marsan, France, on 1 July.

The two-week exercises held at the Mont-de-Marsan Air Base in southwestern France will see the French and Indian pilots enhancing their cooperation skills while conducting simulated air defense and ground attack missions. India deployed four Su-30MKIs and an Ilyushin IL-78 flight refueling aircraft as well as 120 pilots and airmen to take part in the exercise.

SU-30MKI fighter planes are air superiority jets are India-built jets developed in Russia – and they are capable of hitting Mach 2.

The planes are armed with autocannons and can carry up to 12 missiles, rockets and bombs.

And meanwhile, French aircraft Rafale is all-purpose jets which can fly marginally slower than the SU-30MKI.

The jets have been kitted out capable of carrying a nuclear weapon, along with 14 other conventional rockets, bombs and missiles.

French pilots hailed their chance to fly the planes, saying they were “great aircraft” in a comment on Twitter.

In a statement, the Indian Air Force said: “Indo-France joint exercise gives us a great opportunity to interact, exchange views, experiences and knowledge.

“A French Air Force Pilot got an opportunity to fly in the Su-30MKI aircraft, during the integration flying training week.”

It added: “The objective of Indo-France joint exercise is to share good practices and to enhance interoperability and cooperation between the two air forces.”