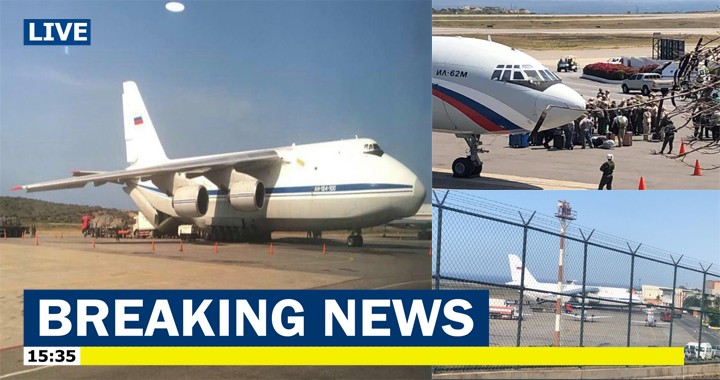 According to media reports In the afternoon on Saturday, March 23, two aircraft of the Russian Armed forces landed at the International airport in Maiquetia, Caracas.

The Russian Defense Ministry send An-124 military transport aircraft, IL-62M jet airliner and more than 100 troops to Caracas, against the backdrop of growing tensions between Venezuela and the U.S.

In addition, An-124 brought 35 tonnes of equipment. What arrived in containers is still unknown.

Some source claims that Chief of the General Staff of the Ground Forces Col. Gen. Vasily Tonkoshkurov have arrived with troops.

Vz.ru reported that the cargo plane arrived in Venezuela from Moscow through Syria.

Photos of the 2 RuAF airplanes that landed in Caracas today. An IL-62 and an AN-124#Venezuela #Russia pic.twitter.com/BY5cFHmwzn

A crisis concerning who is the legitimate President of Venezuela has been underway since 10 January 2019, when the opposition-majority National Assembly declared that incumbent Nicolás Maduro’s 2018 reelection was invalid and the body declared its president, Juan Guaidó, to be acting president of the nation.

The United States is pressing for the Venezuelan opposition to take the reins of the country, and Russia demonstrates its support for the regime with military, economic and diplomatic incentives. The tensions increase and the dispute for power, too.

Maduro’s government, which retains the backing of Russia and China, drew widespread international condemnation after he was re-elected last year in a vote widely regarded as fraudulent.

The United States is leading a push for recognition of Guaido, who heads the National Assembly. He is now backed by more than 50 countries.

Meanwhile, Maduro enjoys strong support from Russia, which is eager to challenge US interventionism, as well as China, which is concerned over the fate of billions of dollars Beijing has lent to Caracas.

The emergence of a large number of the Russian military is the desire of Moscow to show their determination to Trump administration. Moreover, some sources say that a new Russian military base may appear in Venezuela in the near future.

Will Venezuela be the new Cuba in a Cold War between Russia and the US?

The United States sees in Venezuela an opportunity to increase its oil and gas expansionism, or at least so says César Bunster, leader of the Communist Party of Chile in column for El Siglo portal; noting that there is a “rapacious ambition of the northern country over the largest oil reserve in the world, extensive reserves of gas and gold,” among other natural resources.

On the other hand, and as the newspaper Israel Noticias points out, Russia is also behind these Venezuelan resources, so its bet, contrary to the United States, is to support the Nicolás Maduro regime, either from its military expansion, his financial help and his acting plenipotentiary on the country.