Iran says it could have shot down U.S. Navy P-8 Poseidon plane with 35 on-board flying alongside downed drone 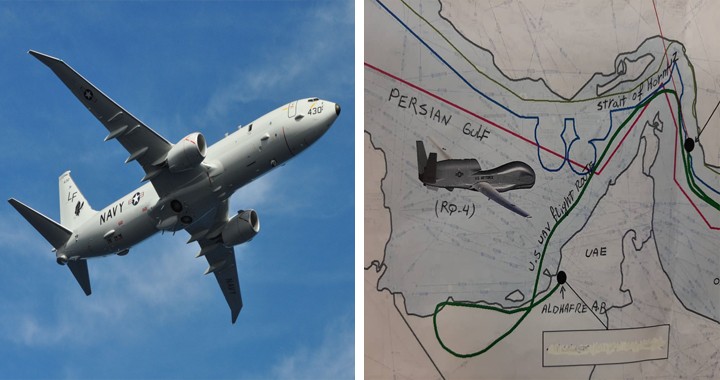 Iran claimed it ‘refrained’ from shooting down a US spy plane with 35 on-board flying alongside its downed drone.

Air Force commander Sardar Hajizadeh alleged a Boeing P-8 spy plane with servicemen aboard was also flying with the drone in Iranian airspace as he unveiled debris in Tehran.

“With the US drone in the region there was also an American P-8 plane with 35 people on board,” Amir Ali Hajizadeh, head of the Guard’s Aerospace Force, was quoted as saying by the Tasnim news agency.

“This plane also entered our airspace and we could have shot it down, but we did not,” he said.

He ominously said it had not been attacked ‘because our goal was to warn the Americans,’ Tasnim News reported.

There was a P-8 surveillance aircraft operating in the area at the time Iran shot down an RQ-4 yesterday, a US official tells CNN.

The plane was in international airspace, the official said.

The P-8 Poseidon — based on Boeing’s 737-800 airframe — carries anti-submarine and anti-surface warfare equipment, as well as shipping interdiction and electronic support measures.

Iranian state TV today showed off debris from the downed spy plane, including its fuselage, but none of the secret technology contained within.

Iran released the first video of the purported wreckage of downed U.S. drone

Previous Trump reportedly signed off military strike on Iran, Then Abruptly backed out with planes in the air
Next 9 dead after a Beechcraft A90 King Air aircraft crashes near Dillingham Airfield, Mokuleia