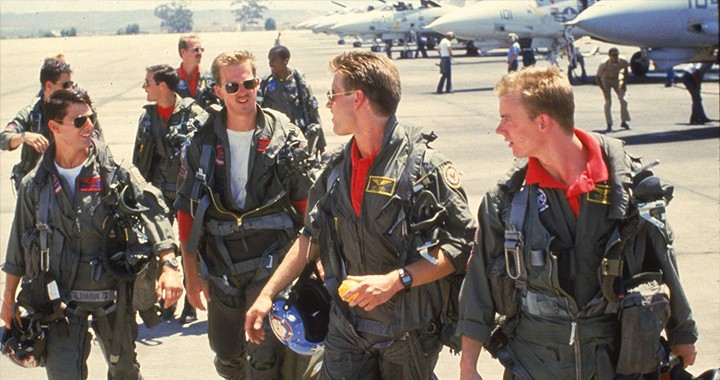 Top Gun” sequel, “Top Gun: Maverick,” filmed onboard USS Theodore Roosevelt in February. Here’s What It Was Like to Run a Carrier as the ‘Top Gun’ Sequel Films Onboard

Capt. Carlos Sardiello who commands the Roosevelt shares the challenges he faced during top gun filming

What they would talk about, however, was the challenge of balancing the film crew’s needs with training aboard the ship, which was not put on hold during the shoot.

“It was amazing — two weeks of very, very difficult work because we were training at the time, taking care of our mission and, on top of that, supporting the filming,” Sardiello said.

“It was very rewarding to sailors looking back on it to be a part of it.”

Balancing filming with training meant adding another level of complication to operations aboard the carrier.

“They fit into our operations. We set the bounds and the constraints for them to achieve their objectives at the same time,” Sardiello said.

“Another layer of coordination, another team member, to make sure they were doing what they needed to do safely, meet our training objections and to help them capture what the Navy is providing them.”

Down in flight deck control, Lt. Cmdr. Alex Diaz said his major challenge was organizing the flight deck around the needs of training and aircraft background shots sought by the film crew.

“At that stage, if you’re making Top Gun 2, me being a flight decker my whole career, you had me at ‘hello,'” he said, adding that the command and film crew coordinated the schedule carefully.

“They didn’t expect you to go from filming into launching aircraft. There was a gap big enough to be able to fit both requirements.”

Still, filming a movie brought a few unexpected situations for some of the sailors onboard.

“We supported the film crew. We used radios for stuff I thought we’d never use radios for [like], ‘We need them to hair and makeup,'” said Lt. Cmdr. Julie Holland, the ship’s public affairs officer.

Here is a group photo with the cast and crew proudly displayed on Sardiello’s office table here. The photo is, however, signed by Tom Cruise, “Top Gun Maverick,” according to the inscription.

The Crew Didn’t reveal too much about the hugely anticipated “Top Gun” sequel, “Top Gun: Maverick. Although sailors here dropped a few hints about spotting movie stars around the ship as it was docked in San Diego for the film shoot, no cats — or Tomcats — were let out of the bag.

An F-14 Tomcat, reportedly borrowed from the San Diego Air and Space Museum, was spotted by onlookers on the carrier’s deck during the February shoot.